Statement of the United States, France and the Presidency of the European Commission

PRESIDENT BUSH: I want to welcome two friends to Camp David: President Sarkozy of France, who is representing the European Union, and President Barroso of the European Commission. We're really glad you're here.

I'm looking forward to an important discussion of the global financial crisis, which is having an impact on hardworking people all across the world. The first task is to stabilize the financial markets in our own countries. Given that the world has never been more interconnected, it is essential that we work together because we're in this crisis together. 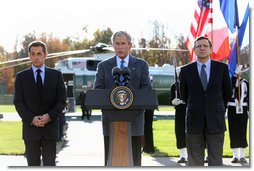 That's why over the past few weeks the United States and our partners in Europe have cooperated closely to address this challenge. Earlier this month, the Federal Reserve, the European Central Bank, and four other central banks carried out a coordinated interest rate cut. Last weekend, G7 finance ministers and central bank governors approved a plan of action to stabilize our markets, rebuild confidence in our financial systems, and restore the flow of credit to our businesses and our consumers.

As part of this action plan, leaders in Europe have taken measures to provide financial institutions with additional capital, provide credit guarantees, and increase deposit insurance.

In the United States, we're taking systematic and aggressive steps to help banks rebuild capital and resume lending. For example, the Treasury Department will directly inject capital into banks by purchasing equity shares. The Federal Deposit Insurance Corporation has temporarily guaranteed most new debt issued by insured banks, which will make it easier for these banks to borrow needed money from each other. The Federal Reserve is launching a new program to provide support for commercial paper -- a key source of short-term financing for America's businesses and financial institutions.

These are historic measures, suited to our system, which I believe will work. These measures will take time. We're dealing with a significant problem. But the American people and our friends around the world can know that we have confidence that the measures will work.

In addition, G8 leaders issued a statement this week expressing support for an international meeting on the financial crisis. I've been in touch with Prime Minister Aso of Japan, who happens to be the President of the G8. We've been consulting with the Japanese. I look forward to hosting this meeting in the near future. Both developed and developing nations will be represented. And together, we will work to strengthen and modernize our nations' financial systems -- so we can help ensure that this crisis doesn't happen again.

For this meeting to be a success, we must welcome good ideas from around the world. So I'm looking forward to hearing from President Sarkozy and President Barroso this afternoon, and from other leaders in the days ahead. And of course I'll share my ideas, as well. 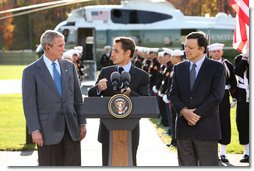 As we make the regulatory and institutional changes necessary to avoid a repeat of this crisis, it is essential that we preserve the foundations of democratic capitalism -- a commitment to free markets, free enterprise, and free trade. We must resist the dangerous temptation of economic isolationism and continue the policies of open markets that have lifted standards of living and helped millions of people escape poverty around the world.

This is a trying time for all our nations. I am confident that we will overcome the challenges we face. With determination and focused action, we will weather this crisis, return our economies to the path of prosperity and long-term growth.

PRESIDENT SARKOZY: (As translated.) President, my dear George, thank you for having invited us. We -- and by that I mean I, myself, and President Barroso -- have a mandate from the 27 members of the European Union to come here and say first and foremost that this is a worldwide crisis and, therefore, we must find a worldwide solution.

Each region of the world, each part of the world, to begin with the United States and then the European countries and now Asia, are trying to find an answer to the crisis, but this answer will be all the more effective insofar as we find it together, we speak with one and the same voice, and we build together the capitalism of the future.

I say things that I deeply believe here. This may be a great opportunity if we do not fall back into the hateful practices of the past -- practices that have led us exactly where we are right now. The President of the United States is right in saying that protectionism and closing one's borders is a catastrophe. He is right to say that it would be wrong, catastrophic, to challenge the foundations of market economics. But we cannot continue along the same lines because the same problems will trigger the same disasters. We can only go forward with a sense of responsibility and that those who have made the mistakes bear the brunt of their errors and shoulder that burden of responsibility.

And we have come here on behalf of Europe to say to this great American nation that we wish to build a better world -- the world of the 21st century; that we wish to work hand in glove in building this world with you. But we must not waste any time. We want a summit -- nations of the G8 -- as has been stated, and no doubt the G5 countries, so that together with Asian states and others, we find a worldwide solution. This must be done forthwith, as President Bush has said, possibly even before the end of the month of November. 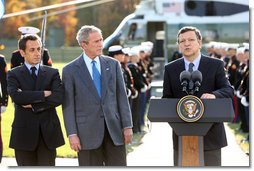 And we believe that insofar as the crisis began in New York, then the global solution must be found to this crisis in New York -- all of us putting our heads together, we must look on the fundamental rules that will apply to this 21st century of ours. We live in the 21st century, but we continue to apply 20th century rules. Hedge funds cannot continue operating as they have in the past; tax havens, neither; financial institutions that are under no supervisory control -- this is no longer acceptable, this is no longer possible. Together, among friends, among allies, we must be able to say to the world that we are determined to find a solution together, to find answers together.

George, my friend, together with José Manuel, myself, we speak with one and the same voice. We have brought European nations together; that was no easy task. There were British traditions, French traditions, German traditions, Latin traditions -- but we found a solution. And why were we able to do so? Quite simply because this is such a serious crisis, it is such a systemic crisis.

And it is on that note that I wish to end. Why must we make haste? We must make haste because we must stabilize the marketplace as swiftly as possible by coming up with answers. Once calm has been restored, we must avoid at all costs that those who have led us to where we are today should be allowed to do so once again. We believe in the capacity and the ability of the American people to come up with the answers the world is waiting for, is expecting, because this sort of capitalism is a betrayal of the sort of capitalism we believe in.

And that is the reason why, with President Barroso, we have come to make Europe's voice heard. And next week, we will be chairing the Europe-Asia summit and get across the same message.

In today's world, this world of ours, we cannot leave anyone out -- anyone out of the global worldwide solution that we need to this crisis. Thank you, Mr. President, for having invited us. Thank you for using your term of office right up until the very end to help the world find the answers to a crisis that we must contain. We must not give way to fatalism.

PRESIDENT BARROSO: Mr. President, George, thank you for receiving us here at Camp David. This is a global financial crisis that requires global solutions. Europe is taking decisive action. Our 27 member states and European Union institutions have worked and have agreed this week on a common framework for directions to deal with the financial crisis. This includes measures to address liquidity in interbank markets, recapitalization of banks, and guaranteeing households' deposits. Coordination and consistency of countries' decisions is the way to secure an efficient response to these unprecedented challenges. For these unprecedented challenges, we need an unprecedented level of global coordination.

The European Union and United States account for a very significant share of world finance. Around 77 percent of world also finance is from the United States and from Europe. The Europeans and Americans must now join efforts and extend our cooperation to major developed and emerging countries. We must act swiftly to respond to the urgency, but we must also look forward at the medium and long term.

The international financial system -- its basic principles and regulations and its institutions need reform. We need a new global financial order. Together, the European Union and the U.S., we can make a difference together. We should show the way towards an international response to the financial crisis and contribute to global growth.

This is why Europe wants the calling of an international summit as soon as possible to launch an effective world response to world crisis. It's precisely because if you live in open societies and open economies -- open societies need rules, the rule of law, the rule of democracy. Markets also need rules; if possibly, commonly agreed rules. And as President Sarkozy just said, we'll be this week also in Beijing for the ASEM summit where we hope to engage also with our partners around this very line.

Addressing the financial crisis must go hand in hand with providing our enterprises and citizens the conditions for creating wealth and jobs. I really believe we have a very strong responsibility. Thank you very much for receiving us.