For Immediate Release
Office of the First Lady
October 16, 2008

Statement by Mrs. Bush on the Ladies in White


Today, U.S. Secretary of Commerce Carlos M. Gutierrez and I spoke by digital video conference to members of the Ladies in White in Cuba. These women show a courage and determination that is deeply moving, and their stories are an important reminder that dictatorship cannot crush the spirit of freedom.

The United States will continue to shine a light on the abuses of the Castro regime, which has imprisoned the husbands, sons, and brothers of the Ladies in White, as well as other Cubans who attempt to exercise their fundamental human rights. The United States supports the efforts of the Ladies in White and other independent civil society activists to free all political prisoners and restore human rights in Cuba. 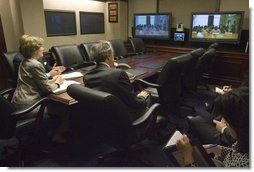 The Ladies in White is an organization that includes spouses and other relatives of jailed dissidents. The organization was formed in 2003 to protest the arrest of 75 dissidents by the Cuban regime. Members of the organization have been consistently detained, threatened, and at times beaten by police during their peaceful protests. 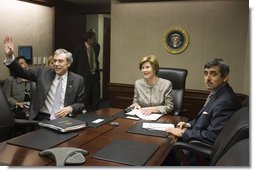