For Immediate Release
Office of the First Lady
October 16, 2008

MRS. BUSH: Thank you very much, Ambassador. Thank you for hosting us here today for this very important announcement. Thank you also, Mr. Minister, for joining us today, Mr. Jabr. I also want to recognize the Director of the Institute of Museum and Library Services, Anne Radice, that's here. Thank you very much for also joining us, Anne.

Americans have become well-versed in Iraq's recent history. Yet many of us may not realize that the people of today's Iraq are the guardians of 10,000 years of history -- tablets etched with the earliest samples of human writing, musical instruments from the kingdom of Sumer, statues from the time of King Nebuchadnezzar. All of these ancient objects belong to the "Cradle of Civilization" -- a land we now call "Iraq." 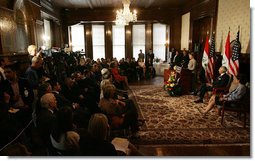 Iraq's cultural heritage organizations were once the best in the Middle East. But travel restrictions, diminished resources, and violence under Saddam Hussein's regime made it impossible for them to sustain this excellence.

Since the overthrow of Saddam's regime, the United States has worked to help the people of Iraq rebuild your cultural institutions. The State Department has already invested more than $3 million in these efforts. It's helped to bring Iraqis to the United States for intensive professional training. It's helped to build partnerships between American and Iraqi museums, and support extensive infrastructure repairs to the Iraq National Museum.

Recent security gains and increased stability have set the stage now for a more vigorous effort to promote Iraq's cultural history. Today, I'm pleased to announce the launch of the Iraq Cultural Heritage Project. This project will build the capacity of Iraq's museums and other cultural institutions to overcome the decades of conflict and isolation. It will draw on the expertise of the U.S. National Park Service and private cultural institutions in the United States.

The U.S. Embassy in Baghdad is funding the Iraq Cultural Heritage Project with a grant of nearly $13 million. An additional million dollars will be provided by the State Department's Bureau of Educational and Cultural Affairs. And Iraqi officials are requesting increased funding from their own government for preservation efforts that will complement the Project's goals.

Representatives from the United States Department of State worked closely with the Iraqi government to identify three principal initiatives that will be implemented with this first new funding.

First, a new conservation and historic preservation institute will be established in Erbil. This institute will train new professionals to preserve Iraq's historic treasures and to protect more than 12,000 registered archaeological sites in Iraq. 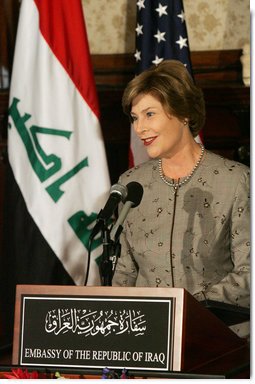 Second, a two-year professional development program will be set up at Chicago's Field Museum of Natural History, in collaboration with the Oriental Institute of the University of Chicago. This program will bring Iraqi professionals to study in the United States, where they'll learn the new methods of preservation that they were largely isolated from during Saddam Hussein's regime.

Finally, the Project will continue improvements to the Iraq National Museum -- which is home to one of the world's finest collections of Mesopotamian antiques. This institution has endured frequent closures during times of war and social unrest. Its doors were permanently sealed in 2006. The Iraq Cultural Heritage Project will hasten the day when the Museum reopens its collections to all Iraqis -- as well as to scholars and visitors from around the world.

Americans understand the importance of preserving cultural heritage -- as evidenced by our many museums, our National Park sites, and our initiatives like the National Register of Historic Places. Preservation efforts are even more important in a country like Iraq, where many citizens cannot remember a time when their nation was free from conflict.

The Iraq Cultural Heritage Project will promote national unity by highlighting the rich heritage that all Iraqis share. And the Project will benefit all humanity by preserving the great historic sites, archaeological wonders, and cultural objects that tell the story of the world's earliest communities. The United States is proud to partner with Iraq as it rebuilds its capacity to safeguard its birthplace of human civilization.