For Immediate Release
Office of the Press Secretary
October 15, 2008

THE PRESIDENT: First of all, I want to thank leaders and small businesses and workers here in Grand Rapids for joining me. I explained to them why I felt the rescue plan was necessary. I explained to them that I was worried that if we did not do something about the financial situation, the economics would affect a lot of hardworking people all throughout our country, including right here in Western Michigan. 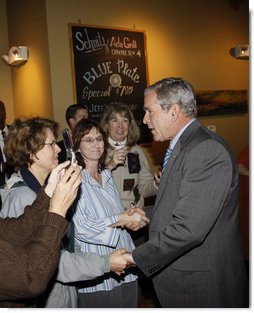 So we moved with a plan big enough to make a difference; a plan with features in it that will cause investments to be temporary, because I frankly don't want the government being involved with businesses, owning businesses -- it's not -- I don't think it's good for the country. It was necessary that the stock be purchased to help us through this financial crisis, but in the long run it's not good for the country. And so the plan is structured to get government in a position where these investments will be returned to the taxpayers -- and it's likely, by the way, that we'll not only get most of the money back, but in some cases actually make a little money.

I made it a plan that is effective so it helps small business owners. The man who owns the bike shop here, he's got to pay for his inventory. And yet, because of the crisis, people are worried about whether the money in their banks -- their non-interest-bearing transactional accounts would be safe. And so we said they are safe -- all aiming to restore confidence in our financial systems; all aiming to make sure that they folks out there that are watching their 401(k)s decline know that the government is taking strong action to bring -- to get this crisis over with so we can get back to the business of getting this economy back on its feet again.

So I want to thank you all for giving me a chance to hear from you. We've got some community bankers here that have been affected by the plan we put in place. And their bank lending is now secured by the FDIC. And I bring a sense of optimism and realism. I'm realistic about how tough the situation is. I'm optimistic that we're going to come through it. And I believe when we come thru it we're going to be better than ever.

And finally I want to assure the folks out here that we're not going to be using your taxpayer money to, you know, enrich financiers; that we're going to protect your money, help you get it back. But people aren't going to be able to have a golden parachute as a result of your hard work and money going to help provide stability in our financial system. 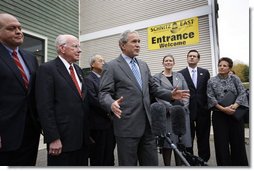 THE PRESIDENT: The Vice President is doing fine. I talked to him this morning -- thank you for asking. He was at our briefings this morning. He came in and told me he was going to head back into the hospital to have his, you know, his heart checked, worked on. And he said this is the exact same procedure he had a while ago. And he was confident, his doctors are confident, and therefore I'm confident.