For Immediate Release
Office of the Press Secretary
October 14, 2008

THE PRESIDENT: Please be seated -- not you all. (Laughter.) It is a pleasure to welcome the Stanley Cup Champion Detroit Red Wings back to the White House. Yes, please hold your applause. (Laughter.) I am looking forward to getting a jersey, as opposed to an octopus. (Laughter.)

In 2002, the Red Wings were the first NHL team I hosted for a Stanley Cup ceremony. Turns out they are the last team I'll be hosting. (Laughter.) You guys may be back next year -- but not me. (Laughter.) So I welcome you here. 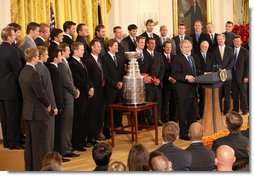 The race for the Cup was thrilling. You started the season on a tear; you ended with a league-leading 115 points. In the playoffs, you beat Nashville, swept Colorado, dusted Dallas. (Laughter.) In game five of the finals, you were just 34 seconds from raising the Cup when the Pittsburgh Penguins scored to tie the game, then scored in triple overtime to extend the series. But you did not get discouraged. You were determined -- and you won. And we congratulate you for winning a very, very hard Cup to win, the Stanley Cup.

I want to thank the Ilitch family for joining us. Give Mom and Dad my very best. I want to welcome and congratulate Ken Holland, General Manager of the Detroit club; Mike Babcock, the Head Coach. The Commissioner -- Mr. Commissioner, welcome. I'm proud you're here.

Carl Levin, Senator from the great state of Michigan, representing all the Red Wing fans who have joined us today. Senator, I'm glad you're here. Members of my administration -- who should be working, but instead are -- (laughter.) Of course, we welcome the players, the coaches, the personnel, and all the fans.

I want to thank the members of the Armed Forces for joining us. We are proud of your service to the United States of America. (Applause.)

And finally -- and finally, it is a pleasure to welcome future Stanley Cuppers -- the Auburn [sic] Extreme Hockey Club. I guess "extreme" means extremely good. (Laughter.) Anyway, we're glad you're here. Thanks for coming. I know the players are thrilled that you've come, as well.

The Stanley Cup is the oldest trophy in professional sports. It's also very difficult to win. It takes four rounds in the playoffs -- 16 wins in as many as 28 games -- before an NHL player can skate and hold the Cup. That's a lot of work after a regular season.

Kris Draper set an unofficial record of sorts. He is the first player to score a playoff with his teeth. (Laughter.) Where's -- (laughter.) Those are beauties. (Laughter.) But somebody said they wished he'd have kept his Chuck Norris beard. (Laughter.) 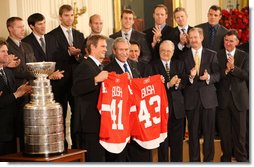 Chris Chelios set a record when he played his 248th career playoff game. At 46 years old -- or 46 years young -- Chris is the oldest player to win the Stanley Cup, and the second-oldest player to play in the NHL. That guy is going to play a lot more. I mean, if he can do it age 46, why not 52 like Gordie Howe? (Laughter.)

To put that in perspective, Chris's defensive partner, Brett Lebda, is 26 years old. As a kid, he rooted for Chris when he played for the Chicago Black Hawks. Hey, guys, imagine how cool this is -- you grew up with a player as your idol and then you got to play with him to win the Stanley Cup.

Particularly inspired by the story of Darren McCarty. Darren played 11 season with the Red Wings between 1993 and 2004. But he had a problem -- he drank too much, and it brought his career to an early end. But Darren McCarty did not give up. Darren McCarty decided to do something about it. Last fall he approached his friend, Kris Draper, told him he'd cleaned up his life, and he thought he had a little hockey left in him. So he plays for the Flint Generals in the IHL, works his way up to the Red Wings AHL affiliate at Grand Rapids Griffins. And then in March, as the playoffs approached, Darren got a call from the Red Wings offering him a shot with the team.

This guy got his life back together, seized the moment, and scored the opening goal in game two of the series against Nashville. That is a stout story. And -- where are you, Darren? Congratulations to you. (Applause.)

One of the things that is really interesting about the Stanley Cup is that every player on the championship team gets to take the trophy home for a day. Red Wings players took the Cup on adventures across the world -- to Sweden, Finland, the Czech Republic, Slovakia and Russia. Coach Babcock took the Cup water skiing. Slalom or two skies? (Laughter.)

Many Red Wings used their time with the Cup to lift the lives of others. Kris Draper took the Cup to Toronto's Hospital for Sick Children. That must have been a joyous moment for them to see the Cup. Coach Babcock took it to visit the disabled residents of a Sherbrooke Community Center. Brian Rafalski took it to a Wisconsin veterans home. 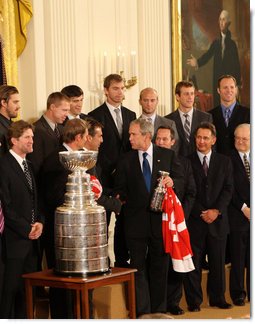 Chris Osgood, Dan Cleary, Kris Draper, and Brett Lebda took the Cup to visit the troops at Michigan's Selfridge Air National Guard Base. And today, Red Wings players took the Cup to visit wounded warriors at Walter Reed. As the Commander-in-Chief of a fabulous military, I thank you for honoring them -- (applause.)

There is a sign over the door of the Red Wings locker at Joe Louis Arena that reads this: "To whom much is given, much is expected." The Red Wings live up to those words -- on the ice and off the ice. And so I congratulate the players, their wives/girlfriends, the coaches, all those who support the team. The unheralded heroes in the locker room that make sure the lives of these players is as comfortable as possible -- the trainers, the laundry handlers, the equipment handlers. I congratulate you for achieving a dream that millions of kids dream about, including those in the room.

Thanks for bringing the Cup to the White House. Good luck for the rest of the season. May God bless you.

And now it is my honor to bring Captain Nick Lidstrom to the podium. (Applause.)

NICK LIDSTROM: Thank you very much. On behalf of Mr. And Mrs. Ilitch and the entire family, along with the entire Red Wing Hockey Association and family, I'd like to hand over a couple of gifts to the President here. As he said, he's not going to be here next year, but we'd love to come back again. (Laughter.)

I'd also like to have my friend, Chris Chelios come over and add a little helping hand here.

We have a dads trip every year that we have a chance to bring our dads on a trip -- out West usually. And this time around we'd like to -- when spring comes around and playoff hockey is around the corner again, we'd like the President and his dad to watch us win the Cup again. (Laughter.) So we don't have one, but two jerseys to hand over to the President. (Applause.) 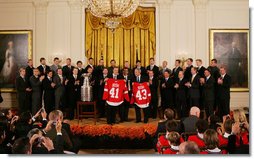