PRESIDENT BUSH: Buongiorno. (Laughter.) Fellow citizens, distinguished guests, thank you all for being here as we receive a wonderful visitor -- the Prime Minister of the Italian Republic, Silvio Berlusconi. (Applause.) He is a man of accomplishment, a statesman from a great nation, and a warm friend of the United States. Mr. Prime Minister, you honor us with your visit, and Laura and I are so pleased to have you come to the White House on Columbus Day. 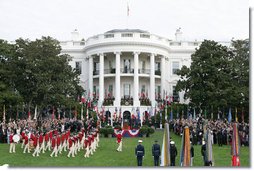 On this national holiday, America remembers the explorer from Genoa, who led a fleet of three tiny ships on a great journey of discovery. Christopher Columbus earned his place in history by introducing the Old World to the New. And in the story of his life, Americans see qualities that are so much a part of our nation -- the vision to take a risk and to explore the unknown, the courage to persevere through difficulty, and the optimism to greet every new day with confidence and joy.

Italy is rightly proud of Christopher Columbus. And America is proud that so many other Italians have journeyed across the Atlantic and made this land their home. Generations of Italian immigrants have strengthened America with their own traditions of faith in God, pride in family, devotion to country, and love of life. In more ways than can be counted, the United States is a better place for the influence of the sons and daughters of Italy.

With the visit today of Prime Minister Berlusconi, we reaffirm the close and trusting friendship between our two countries. For more than six decades, America and Italy have been partners in the work of freedom and progress. We look to the future with confidence.

Together, we have worked to build a strong transatlantic alliance that helps guard the lives and liberty of our peoples. We know that further growth of NATO will serve the interest of all who cherish freedom, security, and peace.

Together, we're standing firm against the forces of brutality and instability in our world. Our countries and other peaceful nations have been targeted by terrorists. We will fight those enemies until they are defeated. Our security is threatened by the proliferation of deadly technologies. We're acting to remove that danger. Civilization is challenged by extremist ideologies with a will to power -- and we are determined to overcome hatred and intolerance with the values of decency and justice and democracy.

Together, we are giving support to rising democracies, and defending the innocent against the violent. Italy has shown that commitment by deploying forces to the NATO mission in Afghanistan, and by leading NATO training operations in Iraq. Italian forces are also serving the cause of peace and stability in Lebanon and Kosovo and Bosnia. And, Mr. Prime Minister, America is proud to be your ally in missions that will bring forth a better and a safer world. 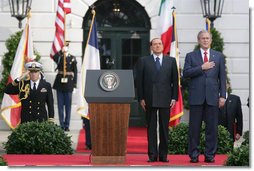 As allies and friends, the United States and Italy have formed strong bonds of commerce and understanding. By our commitment to free markets and the spirit of enterprise, we've helped ourselves and others to succeed and prosper. And in these times of economic turmoil, we're working with other governments to resolve the troubles of the financial markets. Just this weekend, I met with the Finance Minister of Italy and his counterparts from the G7 and G20 nations. All of us will continue taking responsible, decisive action to restore credit and stability, and return to vigorous growth.

Despite many challenges, the United States and Italy know that we are very fortunate countries. We count our blessings, and we share a belief that material wealth brings responsibilities. So we've joined with other industrial powers to fight hunger and disease in Africa, and to promote the development that can lift nations out of poverty and despair. We have been generous, and we've given new hope to millions who suffer. We will not grow tired in the cause of progress, and human rights, and human dignity.

At this crucial time in history, with so much yet to do, relations between the United States and Italy are superb. There's a genuine respect between our peoples, and Prime Minister Berlusconi and I have shared that respect in all our dealings. In these years I have deeply appreciated his friendship and his wisdom. The Prime Minister is a man of sincerity and principle, who speaks his mind and keeps his word. And because of his high spirits and boundless optimism, it is always good to see him and to spend time with him.

So on this beautiful Columbus Day, Laura and I are proud to greet him on behalf of our whole nation. Mr. Prime Minister: Mio caro amico, benvenuto -- my dear friend, welcome to the United States. (Applause.)

PRIME MINISTER BERLUSCONI: (As translated.) Thank you. Thank you very much, Mr. President. Thank you very much for inviting me here on this day, which marks the day of the friendship between the United States and Italy; the day which bears the name of Columbus, that, as President Bush so rightly said, is somebody that both Italians and Americans can look at as an example of courage and vision and firmness.

Mr. President, I, too, have a written speech, but you have already said all of the beautiful things I would have liked to say. (Laughter.) So I'm telling you what comes really straight from my heart. I've been honored over these years by the possibility of cooperating with you. I've found in you a man of great ideals, great principles, a man of vision, but in particular, a person who has been able to pursue those visions with firmness. 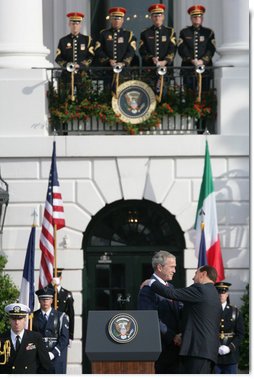 Never, ever I found, in all of the meetings we had over these years, in you the calculations that sometimes politicians made. I've always found in you the sincerity and the spontaneity of a person who strongly believes in what he does. And it was always easy for me to share your ideas, to share your visions, to be next to you, to stand next to you, because we are always bound by these common love for freedom, love for democracy, respect for the others, and the feeling, this common feeling that we are here just to serve our peoples. And I'm a hundred percent sure and positive that history will tell -- will say that George W. Bush has been a great, very great President of the United States of America. (Applause.)

And I would like also to thank you for the compliments that you addressed to the Italian Americans. And I'm also happy and proud and grateful to see that many Italian Americans now sit in leading positions in your country. They are in the American administration, in the justice system, in the various companies and businesses. And they have provided a very important contribution to the closeness of your country.

Today we are in a crisis, in a global crisis which has never happened before in the world economy. Yesterday, I attended in Paris a meeting among the leaders of the countries belonging to the Eurozone -- the countries sharing the same currency, the euro. And we've taken decisions which I hope we can be positive in order to prevent a financial crisis from affecting the real economy.

I'm a hundred percent sure and confident that we have the means and ways to prevent this from happening, and that the wealth of our citizens enjoy will not be affected by this. And the most important thing, as a matter of fact, is that the United States and Europe can act in a concerted and coordinated way.

And as far as I'm concerned, and please allow me to say that from a personal level, I will continue in the next four years of my government to act towards the United States as I've always been doing. And it has always been extremely easy for me to behave like this, because I'm deeply, very grateful to the United States because the United States has saved my country and my people from Fascism, Nazism, and Communism. 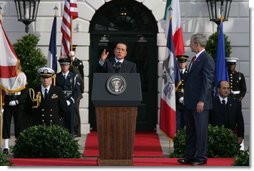 And I want to share with you a short story. After the war, a young Italian student received a prize from his father because of the very good scores that he had achieved in school, in high school. He was sent on a journey, vacation to Rome. After visiting Rome, on the last day of their vacation, the father told his son, "Now we're going to have a very important day, the most important day. I'm going to take you to a sacred place." He took him to Anzio, to a cemetery of Italian -- of American soldiers.

And the father told his son, "Read those names and read those births and death dates. These are young people, young soldiers who have crossed the ocean, who have come here and made the extreme, last sacrifice to give back to you freedom and dignity. You owe them everything which is good in your life today. You have to swear here today that you will never, ever forget that you owe them everything you have, and you will always be grateful to their country and to them for what they gave you."

That young person took that cause, and, you, George, already understood that that father was my father, and that young student was myself. I have never forgotten that cause. I don't forget it; I will never, ever forget it.

Thank you. Thank you very much, Mr. President. Thank you, George. Thank you, Laura. Thank you, all. And it's again a great pleasure and a great honor for me to be here and on this day. (Applause.)