PRESIDENT BUSH: Mr. Prime Minister, Mr. Vice President, Mrs. Cheney, Madam Speaker, members of Congress, Justices of the Supreme Court, members of my Cabinet, honored guests: Laura and I are so pleased to welcome you to the White House.

Every year on Columbus Day, we remember the remarkable history that unites America and Italy. That history began more than five centuries ago when an Italian explorer sighted land after a long ocean voyage. Many believed Christopher Columbus had reached the Far East. But another Italian explorer helped show otherwise. Amerigo Vespucci's journeys revealed that the land was a new world. And America will always be proud to carry his name. 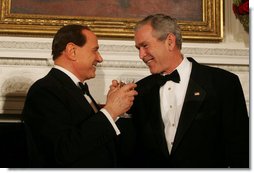 Through the years, generations of Italian immigrants have made their own voyage to the New World. They brought with them a vibrant culture and a strong sense of family. And today their children and grandchildren have risen to some of the highest offices in our land. Among our guests tonight is the first Italian American Speaker of the House, and first woman -- Nancy Pelosi. (Applause.) And we're also honored to be joined by the first Italian American Justices of the United States Supreme Court -- Antonin Scalia and Samuel Alito.

The ties between the people of America and the people of Italy run deep, and the friendship between our countries has never been stronger. The United States and Italy are standing together against the forces of tyranny and terror. We're partnering to meet challenges in our economies, and expand trade and prosperity. And we share a vision of a future of freedom and hope for all the people.

Mr. Prime Minister, you're a strong leader. I admire your enterprising spirit, your visionary leadership, and your commitment to your word. I've enjoyed serving with you on the world stage. I'm honored to call you a close friend.

And it is now my privilege to offer a toast to the Prime Minister of Italy -- Silvio Berlusconi.

(A toast was offered.) (Applause.)

PRIME MINISTER BERLUSCONI: Grazie. You know that I speak a little English, sir. But I speak also fantastic, marvelous Italian. (Laughter.) And so I am perfectionist, I prefer to speak in Italian.

(As translated.) When I take the phone after President George Bush I have always a very big problem, because he already says everything and he says that in the best possible way -- so I don't know what to say. (Laughter.) But I have to say, as we said this morning, that he described very well the history of Italians who have migrated to the United States; they have been welcomed with huge and great generosity and they successfully made progress and developed here in this country.

And I really feel blessed for having worked next to him, side-by-side with him for these eight years. And I'm really happy to have heard from his words what I wanted to be the result of this cooperation that is, that Italy has always been very close to the United States and Italians are always extremely grateful for what the United States has been doing for it. 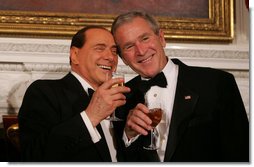 In all of the situations we had to face, with none excluded, we have been close to each other and Italy has tried to prove the appreciation that we feel for your people and your country. I said this morning and I want to repeat it now: The gratitude we feel dates back to many, many years ago. We're very grateful to America because, thanks to the sacrifice of so many young lives, America -- the United States has helped Italy and saved Italy from fascism, Nazism, Communism and does prosper.

And we're very grateful to the United States because at their own expenses -- at the expenses of the American taxpayers they protected us during the Cold War time and protected all of the West from the threat of the Soviet arsenal.

And I had also the chance of delivering a speech in front of the Speaker, Nancy Pelosi, in the Congress, where I said that the West is only one, has to be united and the United States and Europe must work together because Europe needs United States and United States needs Europe.

And I would like to re-read something that I already said in my speech at Congress, that is that when I see an American flag I don't see only the flag of a great country -- I also see the great symbol of freedom and democracy. (Applause.) 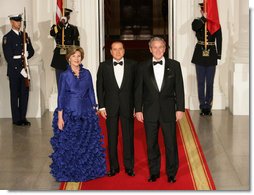 I wish you all the best, and I hope you can make all of your dreams come true. (Applause.) 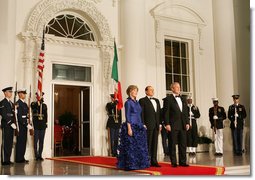 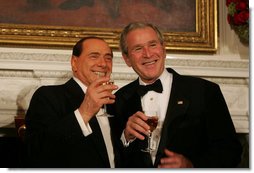