PRESIDENT BUSH: Good morning. Prime Minister Berlusconi and I just had a very good discussion. That's exactly the kind of meeting that you would expect when good friends get together. 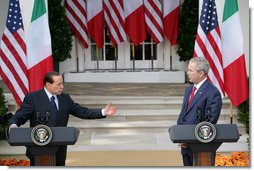 For more than 60 years, the United States and Italy have worked together to strengthen transatlantic alliances and to help freedom expand across Europe. Today we're addressing global challenges with determination and vision and with confidence. America and Italy are working to stabilize global financial markets. People all over the world are understandably concerned about the global financial crisis and about how it will affect their families and their businesses.

I appreciate Italy's participation in the meeting of the G7 and G20 finance ministers over the weekend. Both the G7 and G20 issued important statements committing to work together to help resolve the crisis. I welcome the bold and specific follow-up actions by European nations to pursue the G7 action plan. And the United States is also acting, and we will continue to implement measures consistent with the G7 action plan to help banks gain access to capital, to strengthen the financial system, and to unfreeze credit markets and restore confidence in our financial system.

These are tough times for our economies. Yet we can be confident that we can work our way through these challenges. And America will continue to work closely with the other nations to coordinate our response to this global financial crisis.

America and Italy are working with other nations to fight terror and maintain stability and secure their democratic future. More than 8,300 Italian troops are deployed in regions of conflict around the world. They're helping to fight extremism and to defend liberty and give more people the hope of a better future. About 2,100 Italian troops are supporting the NATO mission in Afghanistan. Italy leads Regional Command West, as well as a provincial reconstruction team.

I appreciate the Prime Minister's willingness to modify restrictions on where Italian forces can operate in Afghanistan. Italy has deployed carabinieri to support the NATO training mission in Iraq. They're doing a fine job. These are highly professional, highly skilled folks that are helping the Iraqi people.

In Lebanon, Italy is the single largest contributor to the United Nations peacekeeping mission. We discussed the need for Syria to respect Lebanon's sovereignty, to cease its support for terror, and to open full diplomatic relations with Lebanon's elected government. 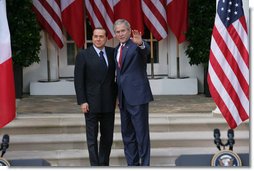 Italy has deployed more than 2,300 troops to maintain stability in the Balkans. Our two nations support an independent and democratic Kosovo, and we're working to ensure that the new European Union mission deploys throughout that country. We agree that all Balkan nations should be invited to join the EU, and other transatlantic institutions as they qualify for membership.

We discussed Iran. We agreed that Iran must not be allowed to have a nuclear weapon. We discussed the importance of full implementation of United Nation's sanctions on the regime in Tehran.

America and Italy are working closely to end the conflict in Georgia. We firmly support Georgia's democracy and sovereignty and territorial integrity. The United States and the EU agree that the territory of Georgia includes the regions of Abkhazia and South Ossetia. We're working to meet the humanitarian needs of the Georgian people and help displaced families return to their homes.

To earn the respect of the international community, Russia must show respect for the sovereignty and territory of its neighborhoods. Russia must accept the responsibilities and obligations of international leadership.

Mr. Prime Minister, Laura and I are looking forward to our dinner with you tonight. We look forward to celebrating the enormous contributions that the sons and daughters of Italy have made in America. And we look forward to honoring the strong alliance that binds our two nations together. Welcome.

PRIME MINISTER BERLUSCONI: (As translated.) Thank you very much, Mr. President. Thank you for this extraordinary invitation. My presence in Washington today is also the tribute of a friendship, personal friendship which binds me to President Bush, as well as the friendship between our two peoples.

And the fact that I'm here on your special celebration of the Columbus Day gives me opportunity of paying homage not only to America, but also to Italian Americans. It is also a thanks to that America which has welcomed and made them part of this country, which offered them the opportunity to enjoy wealth, and offered them the opportunity to give a contribution, which I think has been an important one. Many of the Italian Americans now are leading the country. They sit in Congress and the Supreme Court, in the state government buildings, and key roles of this administration, the administration of the biggest democracy in the world.

Our two countries have tackled together also, recently, the challenges and the problems. Our friendship is a special friendship which has its roots in common values, in sharing a world which is inspired by love for democracy and freedom. This is the deep meaning of this bond -- not only a personal bond which I have for President Bush, but also the bond which unites our two countries and our two peoples.

Today, more than ever, values do matter, in a moment when two visions, opposing visions of the world are confronted -- the vision of ignorance, of prevarication, violence on the one hand, and the vision of freedom, of respect of rights and equality of all human beings on the other side.

Over these years we have shared a difficult historical moment -- the tragic September -- 9/11, which has changed the world. We have been called upon to tackle difficult challenges, being aware of the fact that enemies must be defeated with every means available, with the strength of our beliefs and our heritage of ideals. The globalized world continues to test us by submitting us to bigger and new challenges that we can't but give concrete answers to these challenges.

And once again was the fact of being concrete and the efficacy of the actions we agree upon which is helping us to solve one of the most recent crises which have affected our countries, that of the financial crisis, which we must absolutely prevent from being a crisis affecting real economy, as well.

Upon indication of the other leaders of the countries which in Europe share the single and the same currency, I reported and briefed President Bush about what we decided yesterday during the summit meeting of the Euro-area countries. This proposal will be then submitted to the European Council meeting, which will be held on Wednesday. And I also informed President Bush that today at 3:00 p.m. in various countries -- Germany, U.K., Italy, France -- council of ministers meetings were held, which have concretely implemented through low regulations provisions, the decisions which were made yesterday, in order to support real economy, in order to make it possible for liquidity to be guaranteed to our banking systems so that banks can continue to play their role and do their job -- that is support investment by businesses and companies and support consumption.

I think this is really the objective we must pursue with a coordinated and concerted action -- that is, what has been developed over the world, in the world of markets, which have moved away from reality should not affect the reality of economies. And the concerted and common action between the United States and Europe will certainly have chances to make the real economy -- to prevent real economy from being affected by what has happened all over the world in the financial markets.

So we will continue to work together. President Bush has also expressed the intention to have a meeting among the leaders within the G8 in the next few weeks. I absolutely agree with him. I think that everything which can be done for a coordinated action, just to pursue a common method and behave in the same way, versus this global crisis, is something which is positive.

He is a person -- he is a man of vision. He is an idealist. And also he has the courage of implementing what he believes is right, what he thinks needs to be done to pursue the ideals which he considers to be right for himself, his people, and the world. The United States has taken over the responsibility of taking care of the world.

I would like to express a special thanks to President Bush and to his people for what America and United States have been doing over these years. And not only did they save us, save Europe from Communism, Nazism many years ago, but also, the United States has helped us to achieve welfare, wealth and well-being. They were next to us all through the Cold War years. Every time a wound opened in the world, the United States sent its troops, paying a very high price, in terms of human lives, to guarantee freedom of not only the United States, but the rest of the world, as well.

And I think we, all European citizens must be grateful to the United States for this. We must be grateful to the American people. We must bow in front of the sacrifices, and the sacrifices of so many lives, and we have to state and say that never, ever -- the U.S. troops continued to stay in countries where they had intervened to help people save their lives. So they never stayed there to occupy out of interest. And this has to be remembered by all Europeans.

Thank you, Mr. President. Thank you for being here. And believe me, believe me that my feelings are shared by the great majority of Italians and European citizens, as well.

Thank you very much. Thank you again. (Applause.)