For Immediate Release
Office of the Press Secretary
October 10, 2008

THE PRESIDENT: I have been privileged to know many around this table for nearly eight years as I've been President. I got to know them when I was campaigning for President. My little brother introduced me to these Cuban Americans with whom I work with one goal in mind, and that is the freedom of Cuba.

The policies we have in place are all aimed at giving the people in Cuba a chance to worship freely and to speak freely and to go in the public square and express themselves without fear of repression. And so I want to thank you all for your friendship during these years, and my encouragement is, of course, to continue to stand strong for the dignity of the people of Cuba. 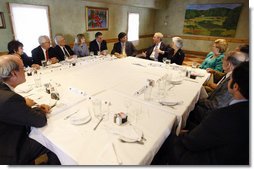 You know, our government has been very clear about our strategy, and that is, is that we will change the embargo strategy only when the government of Cuba lets the people of Cuba express themselves freely. We will change our policy when the people running Cuba free people of conscience from the prisons. But until then we won't change, because our message is to the Cuban people, you're being repressed by a handful of elites that are holding back your great potential. And we will not put policies in place that allow them to benefit personally at the expense of the Cuban people.

You know, recently Ike hit Cuba very hard and all Americans, whether they be Cuban Americans or otherwise, grieve deeply about the damage done to the average Cuban citizen. And so my government, under the leadership of Secretary of Commerce Carlos Gutierrez, offered aid from the United States to the Cuban people. But that aid was rejected by the Castros, which should tell the people of Cuba and the people around the world that the Castro people are only interested in themselves and their power, and not to the benefit and welfare of the Cuban people.

It's so sad that right off the shores of our great, you know, nation that believes in human rights and human dignity exists this dungeon. But someday Cuba will be free. Someday the people who are there will realize the blessing of freedom. And I want to thank the people around this table for working to see that day come. Thank you very much. (Applause.) 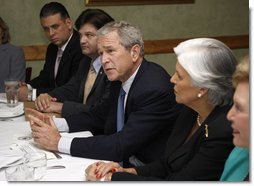