For Immediate Release
Office of the Press Secretary
October 9, 2008

PRESIDENT BUSH: It is my honor to welcome the President of Slovakia to the Oval Office. Slovakia is an ally and friend of the United States. And in my time as President, I have come to admire this President. He's an easy man to talk to. He's got good, strong opinions, and I appreciate his values. 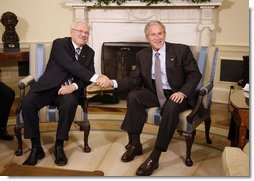 We talked about a variety of subjects. I assured him that the United States will take strong action in dealing with the current economic situation. And I also talked about our common desire to have a -- to work with our European friends to develop a best as possible common policy.

During my presidency I was pleased to support Slovakia's ascension into NATO. I was confident that Slovakia would be an excellent partner and ally in NATO, and history has proven me correct. And I thank the people of Slovakia for supporting the government's decision to deploy troops into Afghanistan to help that young democracy never be a safe haven for terrorists, and to serve as an example of the transformative power of freedom.

Finally, we talked about visa waiver. I told the President that Slovakia has made a lot of progress on visa waiver. And I expect that in mid-November there will be a -- you know, a positive decision for the people of your good country, Mr. President. And I congratulate you and your foreign ministry for working hard on this issue. And I'm glad to welcome you to the Oval Office.

PRESIDENT GASPAROVIC: (As translated.) Mr. President, allow me to start by thanking you for inviting me. This is an extraordinary day for me. And I believe it is also a satisfaction to the people of Slovakia for them to see that Slovakia [sic] has a favorable disposition towards our country, and that we have good relations. I believe that basically our relations, we are currently at our highest point.

It was during his presidency that President Bush supported Slovakia on its way to NATO, which, in turn, helped Slovakia to become a member of the European Union. These were two very important steps and decisions that allowed Slovakia to build its reputation as a credible country. And it is this credibility that allows Slovakia to attract foreign investments into our country. Slovakia continues to be a prosperous country and a country that has and receives credibility in foreign policy, as well.

I'm very glad that Slovakia and its economy is currently in the situation where we will not likely be taking a direct hit from this financial crisis. Slovakia is in a position where we're able to mitigate many impacts of this crisis. On the other hand, Slovakia is the world's largest per capita car producer. This means that Slovakia's exports and foreign trade will suffer. However we believe that we can take steps to mitigate this impact.

In closing, I want to say that I believe, Mr. President, our meeting today was a very strong message of the good relations that Slovakia has with the United States, and vice versa.