For Immediate Release
Office of the Press Secretary
October 8, 2008

Statement by the President on the Occasion of Signing H.R. 7081

THE PRESIDENT: Thank you for coming. Welcome to the White House. Today, I have the honor of signing legislation that builds on the growing ties between the world's two largest democracies, India and the United States. (Applause.) This legislation will enhance our cooperation in using nuclear energy to power our economies; it will help us work together even more closely to reduce the danger of nuclear proliferation across the world. 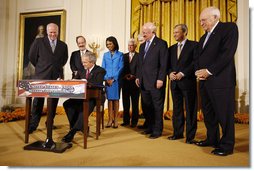 This legislation represents more than three years of hard work by a lot of people. I appreciate the work of the Indian-American leaders from across the nation. (Applause.) I thank the members of the United States Congress for working hard on this piece of legislation. I'm especially grateful for the leadership provided by Speaker Nancy Pelosi, John Boehner, Senate Majority Leader Harry Reid and Republican Leader Mitch McConnell, who worked hard to make sure this bill made it through both Houses at the very end of the session. (Laughter and applause.)

I thank the leaders of the Foreign Affairs Committees in the House and the Senate -- Senator Joe Biden; Dick Lugar; Chris Dodd, who is with us; as well as Representatives Howard Berman and Ileana Ros-Lehtinen. I also welcome the members of Congress here on the stage who worked hard to get this legislation done. I appreciate so very much the contributions of two leaders who played an important role in crafting this legislation -- the late Henry Hyde and the late Tom Lantos. (Applause.)

Other members who've joined us -- John Warner, Senator from Virginia; Eliot Engel, Democrat, House Foreign Affairs committee member from New York; Congressman Joe Crowley from New York. (Applause.) Members of the administration who have joined us -- Mr. Vice President, thank you. I appreciate the hard work that Secretary of State Condoleezza Rice did to bring this deal to fruition -- (applause) -- as well as Secretary Sam Bodman, at the Department of Energy.

I am so honored here that -- to have the Ambassador of India to the United States with us -- Ambassador Sen, thank you for joining us. (Applause.) And I appreciate very much the incredibly efficient work of our Ambassador, David Mulford, and his wife Jeannie -- thank you for being here. (Applause.) You didn't do so bad yourself, Ambassador -- (laughter.)

I thank the congressional staff who worked hard on this legislation. I congratulate you for the constructive work. I appreciate the supporters of the U.S.-India Nuclear Civil Agreement that are here today. All in all, welcome. This is a -- it's a big deal. (Applause.) 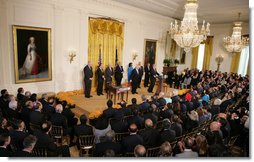 Even though the United States and India are separated by half the globe, we are natural partners as we head into the 21st century. Both our nations emerged from a colonial past to establish vibrant democracies. We have welcomed investment and private enterprise to become leaders in the global economy. We have stood against the dangers posed by extremists, who have carried out attacks in both our countries. We have demonstrated that we cherish liberty, honor human dignity, and respect the rule of law.

Despite these common interests and values, it was not long ago that relations between the United States and India were strained. In recent years, we've worked to transform our relationship into a strong strategic partnership. One area where we saw tremendous potential for cooperation is energy. As our economies have grown, our demands for energy have grown, as well. It's become increasingly clear that we need to generate that energy in ways that are safe and clean and secure.

One energy source that can generate large amounts of electricity with zero emissions of air pollution or greenhouse gases is nuclear power. So three years ago, Prime Minister Singh -- who I consider a dear friend -- and I resolved to work together on a landmark agreement paving the way for our nations to cooperate on nuclear power. By undertaking new cooperation on civil nuclear energy, India will be able to count on a reliable fuel supply for its civilian reactors, meet the energy demands of its people, and reduce its independence [sic] on fossil fuels.

For our part, the United States will gain access to a growing market for civilian nuclear technologies and materials, that will help American businesses create more jobs for our people here at home.

Our agreement will also strengthen global nonproliferation efforts. India has committed to operate its civil nuclear energy program under the safeguards of the International Atomic Energy Agency and other international guidelines. India will continue to build on its strong record of responsibility in operating its nuclear facilities. And India and the United States will cooperate more closely to keep the world's most dangerous weapons out of the hands of extremists and terrorists. 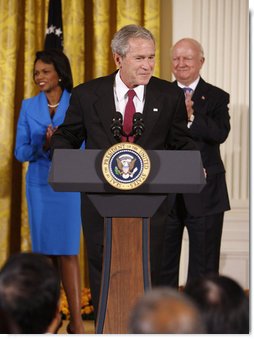 The bill I sign today approves the 123 agreement I submitted to Congress -- and establishes the legal framework for that agreement to come into effect. The bill makes clear that our agreement with India is consistent with the Atomic Energy Act and other elements of U.S. law. By passing this legislation, my administration and Congress demonstrate our common view that nuclear cooperation is in the interest of both the United States and India.

The legislation makes no changes to the terms of the 123 agreement I submitted to Congress. It enables me to bring that agreement into force and to accept on behalf of the United States all the obligations that are part of the agreement. The legislation does not change the fuel assurance commitments that the United States government has made to the government of India, as recorded in the 123 agreement. The agreement also grants India "advance consent to reprocessing" -- which will be brought into effect upon the conclusion of arrangements and procedures for a dedicated reprocessing facility under IAEA safeguards.

This agreement sends a signal to the world: Nations that follow the path of democracy and responsible behavior will find a friend in the United States of America. (Applause.) The American people are proud of our strong relationship with India. And I am confident that the friendship between our two nations will grow even closer in the years ahead.

Laura and I send our best wishes to the hundreds of millions of people in India and around the world who will begin celebrating the ancient festival of Diwali later this month. (Applause.) As we offer our prayers for a happy new year, we can be thankful that the relationship between the United States and India has never been more vibrant and more hopeful.

And it's now my honor to sign the United States-India Nuclear Cooperation Approval and Nonproliferation Enhancement Act. (Applause.) 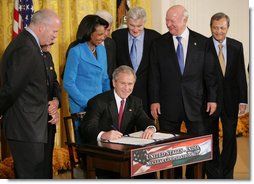 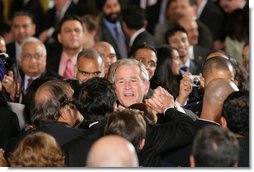