MRS. BUSH: Thanks, everybody. Welcome to the White House. I hope you've enjoyed the reception that you've had first. I'm so excited that you're all here for the 2008 National Medals for Museum and Library Services. You might guess this is one of my favorite events at the White House. I love hearing all the great stories about terrific things that are going on in libraries and museums across our country. And certainly it's a nostalgic time for a former librarian, for me, because this is my last one. And so I want to congratulate all of you again on all the terrific work you do that led to this medal from the National -- Institute of Museum and Library Services. 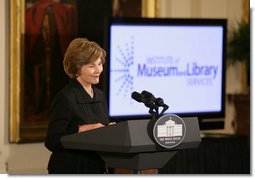 And I have to recognize just one of the -- first, one of the winners that's come -- that's here today, and that's my family's old friend, former Senator Alan Simpson from Wyoming. Thank you so much, Alan, for joining us. (Applause.)

And welcome to the supporters of museums and libraries that have joined us today. Thank you all for coming, and especially for the board members of the institute. Thank you also for your hard work.

The institutions we honor today expand the horizons of our communities and the borders of our imaginations. They unlock the secrets of the human body and open windows into foreign worlds. They catalogue the stories of people in the distant past and the stories of our next-door neighbors. Museums and libraries are playgrounds for the mind -- and our country is fortunate to have so many worthy of recognition. Congratulations to the winners of the 2008 National Medals for Museum and Library Services.

Students can see a real life cowboy musician, they can head out on an art scavenger hunt, or celebrate the birthday of "Buffalo Bill" Cody, and they can do much more than that at the Buffalo Bill Historical Center in Cody, Wyoming. Named after the star of the "Buffalo Bill Wild West" show, the Center houses five different museums. Its Plains Indian Museum Powwow draws more than 5,000 visitors from around the world. Equally popular for community members is the free "Fourth Friday" events that brighten winter nights with live music and special presentations. And hands-on workshops invite people of all ages to learn the art of fly fishing, or embark on an eagle-watching tour. 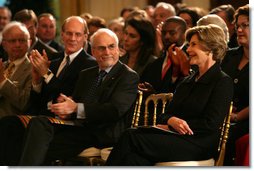 Far from the wilds of the West, Philadelphia's Franklin Institute is preserving the legacy of another historical figure, Benjamin Franklin. The Franklin Center hosts the Franklin Awards program, which has recognized scientists from Albert Einstein to this year's chemistry honoree, Albert Eschenmoser. Visitors to the Institute's Science Center can walk through a giant heart or see the first plane manufactured in quantity by the Wright Brothers. To inspire America's next great minds, the Center for Innovation in Science Learning operates the PACTS program -- Partnerships for Achieving Careers in Technology and Science.

Dr. Albert Hicks is here today. At the urging of his uncle, Dr. Hicks joined the PACTS program when he was 13 years old. He credits the initiative with giving him skills to become a successful physician. Today, he remains involved as a member of the Alumni Board.

General Lew Wallace was a man after my own heart -- he said, "I want to bury myself in a den of books." (Laughter.) But Wallace was more than a bookworm. This Civil War general, violinist, and governor is best known as the author of Ben-Hur. Today, staff at the General Lew Wallace Study and Museum draw inspiration from his diverse experience to design educational opportunities for their Indiana community. The cornerstone of this outreach is the Lew Wallace Youth Academy, which incorporates Wallace's life stories into lessons in problem solving, art, and community service.

Live entertainment and Tae Kwon Do workshops aren't typical library fare. But these are just a few ways the Jane Stern Dorado Community Library invites local youth to explore its many offerings. When it was founded 34 years ago, this institution was the only community library in Puerto Rico. Today, the Jane Stern Dorado Community Library is leading efforts to establish similar institutions in other cities. As a partner in "Libraries for Literacy," it's helped build seven new community libraries on the island.

The Kansas City Public Library has something for everyone in its Missouri community. This week alone, youth can enjoy a weekly family movie, chess lessons, and book clubs -- even a video game night for teens. Older patrons are drawn by lectures, special exhibits, and computer literacy courses that teach the secrets of Microsoft Word and help users become top-notch Googlers. The library now has over 2.5 million books and other materials in circulation -- an upgrade from the set of encyclopedias it began with in 1873.

Meet teenage Jewish immigrant Victoria Confino, explore the home of the Irish-Catholic Moore Family, take a walking tour of the Lower East Side -- Manhattan's Lower East Side Tenement Museum breathes new life into the stories of the immigrants it once housed. Through its "Kitchen Conversations," the Tenement Museum encourages visitors to study current events in the context of America's great immigrant tradition. And the "Shared Journeys" program inspires English-language learners to compare their experiences by those faced by immigrants in 1916 America. The Lower East Side Tenement Museum won a Preserve America Presidential Award in May. So congratulations on being recognized once again for your great work.

The Miami-Dade Public Library System knows there's no better way to get people talking than by telling them a good story. Its "Art of Storytelling" initiative unites the diverse Miami community for workshops and festival celebrations. Teams of storytellers and librarians from Miami have participated in international exchanges with countries, including Jamaica, Ireland, and Ghana. This program is just one way the Miami-Dade Public Library System shows its "Five-Star Commitment" to the community. Patrons can enjoy art displays, computer classes, tutoring, and more.

Up the road in West Palm Beach, the Norton Museum of Art is making arts education a priority. The museum runs the only free year-round after-school arts programs in Palm Beach County. And it partners with the local school district to offer teacher orientations, interactive tours, and professional development days. With so many young people coming through its doors, it's little surprise that creativity is the hallmark of the museum's displays. Exhibits like "Eye Candy: Objects of Wonder and Delight" or "Out of Shape: Bodies in Contemporary Art" -- (laughter) -- make paintings, sculptures, and photographs a draw for people of all ages.

Libraries are not always described as "fun-loving," but that's exactly the reputation earned by Skidompha Public Library, which bills itself as the "library with the curious name." For curious readers in Damariscotta, Maine, this institution is an ideal destination. Its "Books in Motion" program encourages students to read a new book each month and then compare them to the movie based on their -- on that story. A "Literacy Circle" helps adult learners gain reading skills, and a Second Hand Book Shop raises money to finance the library's programs.

The Skokie Public Library in Illinois serves one of the most diverse populations in the United States. And it does it in so -- in diverse ways, from a concert series for young performers to one of the library's first library-sponsored community websites in the country. Adults can enjoy lessons in Japanese gardening or presentations on laughing Yoga. Kids take part in interactive story times. And teens can access "Homework Help" online. The library launched Skokie's "Accessible Library Services" to make their resources available to a broader audience. And people who are visually or hearing impaired benefit from TDD phones, electronic print enlargers, and computer speech synthesizers.

Henry Wadsworth Longfellow wrote, "The student has his Rome, his Florence, his whole glowing Italy, within the four walls of his library." Today, America's museums and libraries take their patrons farther than even Longfellow could have dreamed -- from the inner corridors of the World Wide Web to the outer reaches of space. Thank you to the staff and volunteers of the institutions represented here today. Congratulations to each one of you for being recognized for your service.

And here to tell you more about the medals being presented this evening is a woman who's devoted her life's work to education and service. Ladies and gentlemen, the Director of the Institute for Museum and Library Services, Dr. Anne Radice. (Applause.)