MRS. BUSH: Welcome, everyone. I'm so happy you're here at the White House. Thanks to all of the researchers, the doctors, the advocates, and the others who have joined us tonight in honor of Breast Cancer Awareness Month.

This October we recognize breast cancer survivors who -- those struggling with the disease, and the many family members and friends who support them. And we reaffirm our commitment to saving women's lives by raising awareness of breast cancer around the world.

Here to begin our event is breast cancer survivor, Erin Walsh. Erin traveled with me in October 2007 on the trip to the United Arab Emirates, Saudi Arabia, and Jordan. She was instrumental in setting up the U.S.-Middle East Partnership for Breast Cancer Research and Awareness, which is bringing together researchers and advocates from the United States and those three countries. Thank you, Erin, for sharing your story with us tonight. (Applause.)

I want to acknowledge Ambassador Nancy Brinker, my good friend and the founder of -- she's the Chief of Protocol for the United States, and the founder of the Susan G. Komen Foundation, named for her sister, Susan, who died of breast cancer. Thank you so much, Nancy. (Applause.) Jedd Medefind is here. He's the Acting Director of the White House Office of Faith-Based and Community Service. Thank you very much, Jedd, for coming.

Twenty-three years ago, October was designated Breast Cancer Awareness Month. Then, when -- 23 years ago when it was first named that, most American women knew nothing about breast cancer. They didn't know how to protect themselves, and then the disease was often diagnosed too late for successful treatment.

A lot has changed in 23 years -- and we can thank the advocates, the researchers, and medical professionals here tonight for much of our progress. Today, American women know to perform breast self-exams and to get yearly mammograms. They know to research their family histories to see if they have breast cancer in their family. And they're speaking out to share their experiences with the disease. Increasingly, they are telling stories of survival -- like Erin Walsh, who just shared her story with us tonight. 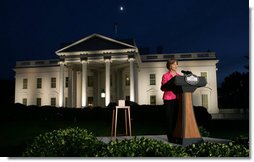 Breast cancer does not respect national boundaries. And neither can our nation's efforts to stop it. The World Health Organization estimates that more than 1.2 million people worldwide are diagnosed with breast cancer each year. Many live in countries where the disease carries stigma and shame. By sharing the lessons we've learned, Americans can empower more women to detect breast cancer early, which today is the closest we have to a cure.

In 2006, I announced the U.S.-Middle East Partnership for Breast Cancer Awareness and Research. This partnership, funded by the Middle East Partnership Initiative, unites the medical expertise of the University of Texas M.D. Anderson Cancer Center and the educational resources of Susan G. Komen for the Cure with local organizations in Saudi Arabia, Jordan, and the United Arab Emirates. Already, the Partnership has reached more than 17,000 beneficiaries. And at the end of this month, it'll expand its influence with a historic regional conference, bringing together more than a hundred breast cancer advocates from 15 different countries.

This outreach is showing results. In Jordan, the number of women who received mammograms jumped from 431 in October 2006 to 1,700* in October last year. At Jordan's King Hussein Cancer Foundation, Suzanne Murad testifies to the importance of these screenings. Four years ago, Suzanne discovered an abnormality in her breast and began receiving treatments for cancer. Today, this mother of three remains cancer free. She tells other women that many factors helped her, but "the most important was that the cancer was detected early."

In Saudi Arabia, Dr. Samia Al-Amoudi is living proof of a survivor's power to speak out and save lives. In a culture where many women are ashamed to discuss breast cancer, Dr. Samia was one of the first Saudi women to share her experience with the disease. She uses her weekly column to write about her struggle with breast cancer, and she continues to share her story in books, newspapers, and television interviews.

Last year, Dr. Samia showed me the Abdullatif Cancer Screening Center in Riyadh. Since my tour, the number of women receiving breast cancer screenings at the Center has increased almost five-fold, from an average of six patients a day to more than 25 patients a day now. Dr. Samia is here with us today. Thank you, Dr. Samia, for encouraging Saudi women to take charge of their health. (Applause.)

In the hope of achieving similar results in our region, I announced the Partnership for Breast Cancer Awareness and Research of the Americas in July 2007. This effort is building collaboration among researchers and advocates in the United States, Brazil, Mexico, and Costa Rica. Dr. Maira Caleffi is here today from Brazil. She founded the breast health institute that's giving thousands of women in her country access to breast cancer screenings and treatment. Thank you, Dr. Caleffi, for your work. (Applause.)

The United States' efforts around the world rely on the resources and the expertise of private institutions -- institutions like the Susan G. Komen for the Cure, the M.D. Anderson Cancer Center, and the Avon Breast Cancer Crusade. This afternoon, the State Department hosted a symposium highlighting international work by each of these organizations. Thank you very much for your contributions. And thanks to everyone here for your commitment to ending breast cancer. From foundations to hospitals, from support groups to citizen advocates -- no matter how you take part in the cause, your work is helping save lives.

We can still do more to support breast cancer treatment and awareness. In honor of Breast Cancer Awareness Month, I sent a letter inviting ambassadors at every United States embassy to participate in these efforts by displaying a pink ribbon, hanging a banner, or taking other appropriate steps. Many of our embassies are already involved. In February, the embassy of New Delhi helped organize the city's first-ever 5K walk for breast cancer awareness. And last December, our embassy in Kosovo launched the Balkans Breast Cancer Initiative to raise regional awareness of the disease.

Tonight in Washington, we're showing our support of breast cancer awareness and research in a historic way. In recognition of the mothers, daughters, sisters, and wives who struggle with this disease, we're lighting the White House in pink, which is the color of the cause. May our lights tonight shine as beacons around the world -- a signal of the United States' commitment to saving lives from breast cancer.

(The White House is lit pink.)

Thank you all very much. Thanks so much to all of our great workers. (Applause.) 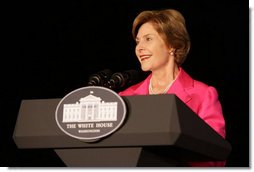