MRS. BUSH: Thank you, all, and thank you very much, Helene. I appreciate it very much. Thank you for the introduction. And I want to thank UNESCO and especially the Permanent Rep from Mongolia, and the Mongolian mission for co-hosting this lunch. Seven years ago it was the Mongolian delegation that introduced the resolution for the United Nations Literacy Decade. Thank you for your continued leadership on this important initiative. 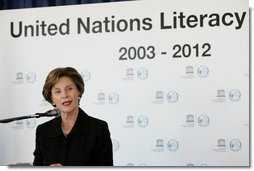 Ambassador Ochir, the Permanent Representative from Mongolia to the United Nations, thank you for all your hard work. Mr. Mark Richmond, the Director of the Division for the Coordination of United Nations Priorities in Education, UNESCO, thank you very much, Mark, as well.

Mr. Cataria, who's the Executive Secretary, Association for the Development of Education in Africa, is here, as well -- thank you, sir, for joining us; Patrick Gaston, the President of Verizon Foundation; and it's very important for our private partners also to be here. And as I look around the room, I see Foundation members from other NGOs and corporations, and I urge you also to be actively involved in global literacy, because it's so important for all of us. So thank you very much. Thank you, Benita; thank you, Dr. Perry Klass, thank you for joining us, and a lot of other friends as I look around the room.

I'm so happy to be here at the U.N. this week to discuss our efforts in helping every person -- every man, woman and child -- in every nation to acquire literacy skills; the literacy skills that they need to be able to participate fully in society.

During the UNGA a couple of weeks ago, I worked with UNESCO to convene the White House Symposium on Advancing Global Literacy. This is the third symposium that we've hosted here in New York during the United Nations General Assembly. We've been joined by 50 or more spouses of world leaders and many, many more education ministers from around the world as we talked about what each of us are doing in our own countries to address illiteracy, and what the projects and programs are that can be replicated worldwide to make sure everyone does learn to read.

At that White House -- the last one, the White House conference on global literacy, we discussed the results of UNESCO's six regional literacy conferences which have been held over the last 18 months. And this gives me a chance to thank the Permanent Reps from those six countries who hosted these conferences around the world: Those conferences were in Qatar, China, Mali, India, Azerbaijan, and Mexico. So thanks to each of you for inviting your neighborhood of countries to your country to be able to talk about what each part of the world can do to advance literacy.

At this last conference here during the UNGA, representatives from each of these conferences spoke about the results, from each of these conferences. And one common theme stood out in all six presentations, and that is the importance of linking literacy education to the life skills needed by adults. In other words, have your primer, that teaches people how to read, be an education on health so that people, at the same time they learn how to read, learn the skills they need to keep their families safe from diseases. Or have those primers teach people about different jobs they can -- that are available in their neighborhoods, in the world; or agriculture; or all the other things that people need to know about the life skills that will benefit them, as well as obviously being able to read about those life skills.

Reporting from the regional conference in Qatar, Dr. Mohammed Bougroum from the University of Marrakech told the story of a young woman who became blind at the age of 22. She grew dependent, totally dependent on others to accomplish simple tasks. She could no longer make a living through her craft of embroidery. But through Morocco's "Reading Access for the Visually Impaired," she learned the skills she needed to perform activities from running errands to preparing meals. And at the same time, she received instruction in Braille. Learning this method first in Arabic, then in English, the young woman was able to recover her independence. And as Dr. Bougroum explained, she learned that literacy was the key to decoding her whole world.

Nations from every region are pursuing strategies that make literacy education relevant to people's daily lives. Mrs. Toure from Mali, who hosted her country's regional conference, reported that Mali has established 750 pilot literacy centers where adult learners can study reading, and at the same time learn disease prevention. Mongolia worked with UNESCO to implement a program that any country with large rural populations, or isolated rural populations, can replicate, and that is using radio, and CD-ROMs, and other distance tools to reduce illiteracy and to promote reading in Mongolia among communities of nomadic herders.

These commitments are a direct result of the rallying cry issued by the United Nations Literacy Decade. UNESCO has shown strong leadership toward fulfilling the Decade's goals. Through its regional literacy conferences, UNESCO has encouraged nations to collaborate and to share proven strategies for addressing illiteracy. In countries where illiteracy rates are the highest, UNESCO's Learning Initiative for Empowerment, or LIFE, program is building government capacity to design and implement national literacy plans. UNESCO, as probably every one of you know, are targeting the 35 countries with the highest rates of illiteracy -- and especially those countries where the governments are receptive to working with UNESCO to starting literacy programs all over each of those countries.

UNESCO has set clear goals for the Literacy Decade, and it's looking for concrete outcomes. Its Literacy Assessment and Monitoring Program, or LAMP, is providing a light that we need, a mechanism by which we can measure our progress. LAMP is now being piloted in five countries, including Mongolia. It's giving us more complete and detailed assessments of literacy levels in these five nations, which can help countries and donors better prioritize our efforts.

UNESCO and all nations can be proud of the strides that we've made over the past five years. But while we are making progress, the Education for All Global Monitoring Report shows it might not be fast enough to meet our goal of cutting illiteracy rates in half by 2015. Moreover, the percentage of women who lack literacy skills remains virtually unchanged. Reaching women with literacy education is especially important because of the profound impact that women have on their families. If women are educated, everything across the board improves for their families: their family's health; there's family -- their family education level; and every other indicator. So it's very, very important that we reach women in each one of our countries.

Over the next five years, all nations must focus on increasing -- bringing literacy skills to underserved populations like girls and women, out-of-school youth, and people living in rural and isolated communities. We must build more effective partnerships among the stakeholders in literacy education -- from the corporations that benefit from an educated workforce to the grassroots organizations that best understand local needs. We must fulfill our obligation to educate all children so that one day we won't have to worry about adult illiteracy.

And we must increase our investment in literacy for all. Two weeks ago, I announced the establishment of the United Nations Literacy Decade Fund to advance global literacy. This fund, which is housed at UNESCO, will support projects that further the goals of the United Nations Literacy Decade. The United States is proud to be the first donor, with an initial contribution of more than $2 million. Today, I'm happy to announce that last week in the CR, the Continuing Resolution, the United States government will contribute an additional $500,000* to this cause of expanding literacy skills to every man, woman and child. We look forward to the contributions from other governments, foundations and donors worldwide.

The mid-decade progress report on the United Nations Literacy Decade is a call to action for all of us. We cannot leave the potential of more than 770 million people untapped. Expanding literacy skills can boost economies with higher wages, can improve productivity and health, and reduce poverty and crime. Literacy is essential for the sustainable solutions to our greatest problems.

Director-General Matsuura asked me to continue as the Honorary Ambassador for the United Literacy Decade -- that is, after my retirement in January -- until the end of this Literacy Decade, and I look forward to working with each one of you to make sure more and more people learn to read across the world for the next few years.

When George was Governor of Texas, a professor from a university in San Angelo, Texas -- you might not know that San Angelo, Texas has universities, but it does -- (laughter) -- wrote me a letter, and he said, "The advantage of the reader over the non-reader is so profound that you would think people would be demanding to learn to read, and to read well."

So I hope you will join me with a renewed commitment to all those people who can't read now, but who can change their lives if they learn to read, so we can open the door for millions of people to gain independence, and we can lay a long-term foundation for prosperity worldwide.

Thank you all very, very much, and thank you for your good work around the world. I appreciate it very much. (Applause.)

* Last week Congress approved the reprogramming of the $500,000, which came from withheld U.S. payments to the UN. The $500,000 was separate from the Continuing Resolution passed by Congress.