For Immediate Release
Office of the Press Secretary
October 3, 2008

THE PRESIDENT: I just had the honor of talking to Treasury Department employees. I thanked them for their hard work over the past six weeks in dealing with a serious financial crisis.

I do want to thank the Secretary, too. Mr. Secretary, you and your team have worked incredibly hard. You've worked with the Congress; you've worked with the financial markets, both domestically and internationally. I know that your people are exhausted in there, and I really appreciate the fact that I'll be signing a piece of legislation that will be a part of solving this crisis, an important part of solving the crisis. 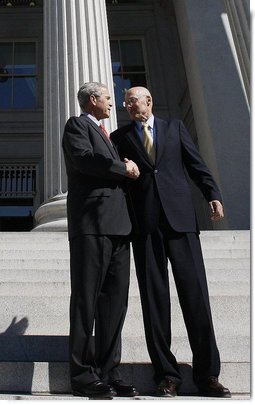 And so I just went up to thank people. Sometimes people in government never get thanked enough for all the hours they keep. And I got a lot of confidence in you, Mr. Secretary, and your team. And I thank you for giving me a chance to come by, and looking forward to -- looking forward to getting this plan in place. I just told the people in the Rose Garden that, you know, it's complicated and we're going to make sure that whatever we do is done in a deliberate fashion and one that will be effective and be mindful of the taxpayers.

Thank you, Mr. Secretary. Appreciate serving with you. Thank you all.