THE PRESIDENT: A short time ago, the House of Representatives passed a bill that is essential to helping America's economy weather the financial crisis. The Senate passed the same legislation on Wednesday night. And when Congress sends me the final bill, I'm going to sign it into law.

There were moments this week when some thought the federal government could not rise to the challenge. But thanks to the hard work of members of both parties in both Houses -- and a spirit of cooperation between Capitol Hill and my administration -- we completed this bill in a timely manner. I'm especially grateful for the contributions of Speaker Nancy Pelosi, Minority Leader John Boehner, Majority Leader Steny Hoyer, Minority Whip Roy Blunt, Chairman Barney Frank, Ranking Member Spencer Bachus. 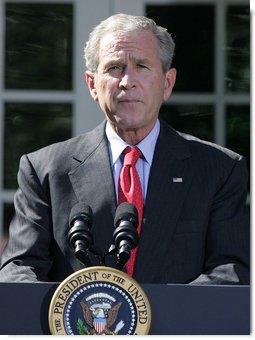 By coming together on this legislation, we have acted boldly to help prevent the crisis on Wall Street from becoming a crisis in communities across our country. We have shown the world that the United States of America will stabilize our financial markets and maintain a leading role in the global economy.

A major problem in our financial system is that banks have restricted the flow of credit to businesses and consumers; many of the assets these banks are holding have lost value. The legislation Congress passed today addresses this problem head on by providing a variety of new tools to the government -- such as allowing us to purchase some of the troubled assets, and creating a new government insurance program that will guarantee the value of others. The bill also ensures that these new programs are carried out in a way that protects taxpayers. It prevents failed executives from receiving windfalls from taxpayers' dollars. It establishes a bipartisan board to oversee the plan's implementation.

Taken together, these steps represent decisive action to ease the credit crunch that is now threatening our economy. With a smoother flow of credit, more businesses will be able to stock their shelves and meet their payrolls. More families will be able to get loans for cars and homes and college education. More state and local governments will be able to fund basic services.

The bill includes other provisions to help American consumers and businesses. It includes tax incentives for businesses to invest and create jobs. It temporarily expands federal insurance for bank and credit union deposits from $100,000 to $250,000 -- a vital safeguard for consumers and small businesses. It provides families with relief from the Alternative Minimum Tax, which would otherwise increase taxes for 26 million taxpayers by an average of $2,200.

I know some Americans have concerns about this legislation, especially about the government's role and the bill's cost. As a strong supporter of free enterprise, I believe government intervention should occur only when necessary. In this situation, action is clearly necessary. And ultimately, the cost -- ultimately, the cost to taxpayers will be far less than the initial outlay. See, the government will purchase troubled assets and once the market recovers, it is likely that many of the assets will go up in value. And over time, Americans should expect that much -- if not all -- of the tax dollars we invest will be paid back.

Americans should also expect that it will take some time for this legislation to have its full impact on our economy. Exercising the authorities in this bill in a responsible way will require a careful analysis and deliberation. This will be done as expeditiously as possible, but it cannot be accomplished overnight. We'll take the time necessary to design an effective program that achieves its objectives -- and does not waste taxpayer dollars.

Our economy continues to face serious challenges. This morning, we learned that America lost jobs again in September -- disappointing news that underscores the urgency of the bill that Congress passed today. It will take more time and determined effort to get through this difficult period. But with confidence and leadership and bipartisan cooperation, we'll overcome the challenges we face, return our nation to a path of growth, and job creation, and long-term economic prosperity. Thank you.