For Immediate Release
Office of the Press Secretary
October 2, 2008

THE PRESIDENT: I want to thank the job creators who have joined me here today to talk about the state of the economy and the need for the House of Representatives to pass the bill that passed the Senate last night with an overwhelming bipartisan majority.

Our discussion today centered around credit. I know there's a lot of discussions in the newspapers and on TV about the credit freeze. Well, let me tell you what this means. It means that if you're running a small company and you need to make payroll, or you need to make sure you got inventory to be able to sell a product, or you want to expand so you can hire somebody, you need to have credit. You need to be able to have money on a regular basis from your local banker. 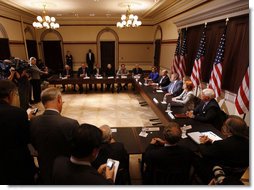 And the problem is, because people are worried about their future, they're worried the government won't act, credit is frozen. People aren't lending money from bank to bank or they're not lending money to our medium- and small-sized businesses.

And that means people's jobs are in jeopardy. And the bill that's before the House of Representatives tomorrow is a bill that has got the best chance of providing liquidity, providing credit, providing money so small businesses and medium-sized businesses can function.

A lot of people are watching the House of Representatives now to determine whether or not they will be able to act positively on a bill that has been improved. People say, what do you mean by that? Well, the insurance for the FDIC goes up to $250,000. That's an improvement to the legislation -- not only for banks but for credit unions, as well.

And so I'm talking to people who are, you know, who come from the heartland, that understand what's taking place in our economy today; people who understand that the House of Representatives needs to pass this piece of legislation.