For Immediate Release
Office of the Press Secretary
October 1, 2008

THE PRESIDENT: Thank you all. Please be seated. (Applause.) Thank you very much. I'm proud to be here on this special night. The USO sure knows how to make a fellow feel at home. After all, that's what you've been doing for six decades. You've been making those who wear our uniform feel at home -- providing them "a home away from home" while they defend our nation overseas. Through many conflicts across many continents, the USO has formed a warm and loving bond with the men and women who wear our uniform. And you know what I know: They are our finest citizens -- and we owe them a debt that can never be repaid. (Applause.) 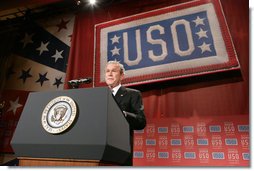 This job comes with plenty of privileges. I haven't seen a traffic jam in seven and three-quarters years. (Laughter.) But no perk bestowed on a President is more satisfying than the honorary title of USO. President 41 understands that as well.

I don't know if you know this or not, but my Dad and I were not the only members of my family affiliated with the USO. It turns out my grandfather, Senator Prescott S. Bush, was one of the very first chairmen of the USO -- and his title wasn't even honorary. (Laughter.)

During this time of war, I've had the opportunity to witness the USO's good works firsthand. I want to thank you for your commitment to our troops, and for your energy and enthusiasm, and for your devotion to our wonderful country.

I welcome the members of Congress. You got a little work to do. (Laughter and applause.) I do want to congratulate my friend, Senator John Warner, who won the Spirit of USO Award. No finer member of the United States Senate than John Warner. (Applause.)

I appreciate the other military leaders, members of the Armed Forces, and their families who are here tonight. I am some kind of proud to be your Commander-in-Chief. (Applause.)

I had the honor of having my picture taken with the USO award recipients and their families. And I congratulate them on setting such a fine example.

I extend my deepest sympathies and my highest respect to the wounded warriors from Walter Reed and Bethesda who are here tonight. (Applause.) I welcome the members of the Diplomatic Corps.

And I have taken note of the Master of Ceremonies -- god, I miss you, Sam. (Laughter.) Well, not really. (Laughter.) 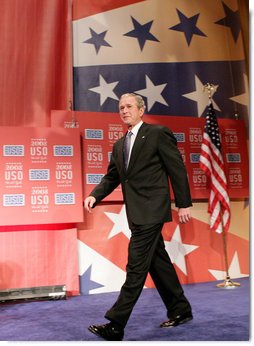 The USO was established in 1941, as our allies were fighting for their survival against powerful armies driven by toxic ideologies. As Americans heard the approaching thunder of war, we were undertaking every effort to be ready. Young men would soon offer their lives in freedom's defense. And as they deployed to theaters of battle around the world, they could count on the USO to follow.

Once we entered World War II, the newly established USO was given an urgent mission: to coordinate civilian war efforts, enlist communities in the fight, and give our forces all the love, care, and support we could offer. And this was vital to our eventual victory. As General Eisenhower put it: "Morale is the greatest single factor in [a] successful war." USO centers in thousands of communities were quickly established -- in churches and storefronts, railroad cars and museums, mansions and yacht clubs. These centers helped families stay in contact with loved ones going off to fight in the war. And the USO enlisted the biggest celebrities of the age to show their support for the troops overseas.

Legendary stars made dangerous treks. Entertainers like Marlena Dietrich, Fred Astaire, Diana [sic] Shore, John Wayne, and many others offered the troops their talents, brought memories of joy -- brought moments of joy and laughter, and memories of home. Looking back on these war-torn days, a former serviceman once said: "I'll never forget [the USO's] positive impact during those dark and perilous times." Well, that statement holds a special meaning to me because it was uttered by Navy pilot George H.W. Bush. (Applause.)

Dad's generation was the first to find strength and solace in the USO, but thankfully, it was not the last. The USO has been on duty whenever America has been deployed in conflict. One memorable moment came in the USO's notable history in 1954 -- Marilyn Monroe interrupted her honeymoon with Joe DiMaggio to perform for the troops in Korea. As she stood before a sea of soldiers, one officer called her "the greatest hit the Yankee Clipper ever made." (Laughter.) One awestruck sergeant who had the privilege of driving her around couldn't help but note that: "In my 14 years of Army driving, this will be the most curves I've ever taken in one car." (Laughter.) Marilyn Monroe performed in sub-zero temperatures and became ill as a result. Yet she called her visit with the troops the best thing that ever happened to her.

No celebrity is more closely associated with the USO than the man who was first introduced to the troops as a relatively unknown radio entertainer. Over the decades, Bob Hope became known to everyone. After a quarter-century performing for the USO, he estimated that he had traveled 2 million miles to entertain 11 million troops. (Applause.) He loved every minute of it -- including the traveling partners he was able to recruit. As he put it: "How else would I get to travel with Lana Turner, Ann-Margret, and Raquel Welch, and have my wife wish me, 'Bon Voyage'?" (Laughter.) 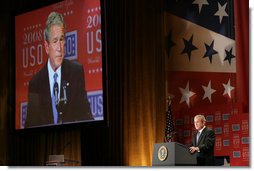 Bob Hope's love for the troops won America's lasting respect. In 1963, President Kennedy presented him with the Congressional Gold Medal in recognition of his service to the troops. At the ceremony, Hope told him: "I feel very humble, but I think I have the strength of character to fight it." (Laughter.) Bob Hope liked to joke about Hollywood's reputation for self-involvement. But the truth is that he took his responsibility to the troops very seriously. He was proud of the chance to make them feel better, at least for a while. And he once said that whenever the troops applauded, it was the best sound in the world.

We may never have an entertainer so closely linked to the USO. But we can be grateful that a new generation of performers is stepping forward to support our men and women in uniform. Some of these generous entertainers are with us tonight. Many of you have gone to dangerous war zones to support our troops. And your love and support has made a world of difference. I think we all know the moment things began to turn around in Iraq: It was when the USO decided to deploy Jessica Simpson. (Laughter.)

As Commander-in-Chief, I greatly appreciate all the entertainers supporting the USO. I thank you for what you're doing. And I encourage more to step forward and join you. (Applause.)

And I appreciate the thousands of USO volunteers who are supporting the war effort and lifting morale. These volunteers are providing vital aid to members of America's Armed Forces in service centers around the world. They're helping our troops get in touch with their loved ones back at home. They're easing the burdens on our military families by offering them an open hand and a shoulder to lean on.

To all the supporters of the USO: Our nation is grateful for your dedication to our men and women in uniform. I join you in prayer for the safety of our troops and the success of their missions. May the USO continue to stand with our troops in times of war -- and may we all live to see a world that stands in peace.

Thank you for having me. And God bless. (Applause.)