For Immediate Release
Office of the Press Secretary
September 30, 2008

THE PRESIDENT: Good morning. Yesterday, the House of Representatives voted on a financial rescue plan that had been negotiated by Congressional leaders of both parties and my administration. Unfortunately, the measure was defeated by a narrow margin. I'm disappointed by the outcome, but I assure our citizens and citizens around the world that this is not the end of the legislative process. 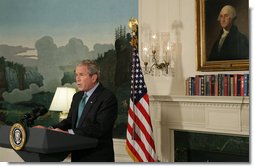 Producing legislation is complicated, and it can be contentious. It matters little what a path a bill takes to become law. What matters is that we get a law. We're at a critical moment for our economy, and we need legislation that decisively address the troubled assets now clogging the financial system, helps lenders resume the flow of credit to consumers and businesses, and allows the American economy to get moving again.

I recognize this is a difficult vote for members of Congress. Many of them don't like the fact that our economy has reached this point, and I understand that. But the reality is that we are in an urgent situation, and the consequences will grow worse each day if we do not act. The dramatic drop in the stock market that we saw yesterday will have a direct impact on the retirement accounts, pension funds, and personal savings of millions of our citizens. And if our nation continues on this course, the economic damage will be painful and lasting.

And I know many Americans are especially worried about the cost of the legislation. The bill the House considered yesterday commits up to 700 billion taxpayer dollars to purchase troubled assets from banks and other financial institutions. That, no question, is a large amount of money. We're also dealing with a large problem. But to put that in perspective, the drop in the stock market yesterday represented more than a trillion dollars in losses.

Furthermore, both the nonpartisan Congressional Budget Office and the Office of Management and Budget expect that the legislation considered would ultimately cost the taxpayer far less than the $700 billion. Because the government would be purchasing troubled assets and selling them once the market recovers, it is likely that many of the assets would go up in value over time. Ultimately, we expect that much -- if not all -- of the tax dollars we invest will be paid back.

My administration will continue to work closely with leaders of both parties on Capitol Hill. I appreciate their determined efforts. While Congress is out today for the Jewish holiday, my administration will be talking to Congressional leaders today about how we can move legislation forward when members begin returning to the Capitol tomorrow. Our economy is depending on decisive action from the government. The sooner we address the problem, the sooner we can get back on the path of growth and job creation. This is what elected leaders owe the American people, and I am confident that we'll deliver. Thank you.