PRESIDENT BUSH: I was disappointed in the vote with the United States Congress on the economic rescue plan. We put forth a plan that was big because we got a big problem. I'm going to be talking to my economic advisors after my meeting here with the President, and we'll be working with members of Congress -- leaders of Congress on the way forward. Our strategy is to continue to address this economic situation head on. And we'll be working to develop a strategy that will enable us to continue to move forward. 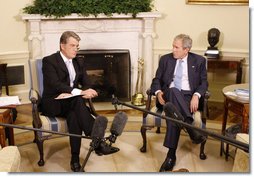 Mr. President, welcome. I welcome you here to the Oval Office. I admire your steadfast support for democratic values and principles. A lot of Americans have watched with amazement how your country became a democracy. We strongly support your democracy. We look forward to working with you to strengthen that democracy.

You and I just had a good discussion about a variety of issues. We discussed, you know, the NATO and Membership Application Process. We discussed energy independence. We discussed ways that we can work together to bring stability and peace to parts of the world. And I thank you for joining us here in Washington in the Oval Office. And I send my respect to the people of Ukraine.

PRESIDENT YUSHCHENKO: (As translated.) First of all, Mr. President, I would like to thank you for the atmosphere that our negotiations were held in. We had our conversation in a very constructive manner. We touched upon the range of issues, starting from our bilateral relations, and the implementation of U.S.-Ukraine action plan, and we consider this road map as being implemented in a successful way. A lot of attention was paid to the security component and security itself. And special attention was paid towards Ukraine integration into European and Euro-Atlantic structures.

We raised the issue of energy cooperation, which is a very urgent issue for us. And we believe that we've done excellent job on the adaptation of American nuclear fuel for our nuclear power units, and we intend to continue that.

We also discussed the domestic political situation in Ukraine, which in my opinion is far away from being tragic, and not dramatic. Ukraine has enough democratic resource and tools to give sufficient response to any crisis that may occur in the Ukrainian parliament. And this is probably where the Ukrainian strength and optimism is.

I also asked Mr. President to delegate the high-ranking delegation from the United States of America to participate in the commemorating event of the great famine in Ukraine of 1932 and 1933. The commemoration day will be on November the 22nd, and this will be the commemoration of the biggest humanitarian catastrophe in our country. And we need to do everything for that issue to be included in the UNGA agenda.