PRESIDENT BUSH: I'm honored to welcome my friend, the President of Lithuania, here to the Oval. Welcome back, Mr. President. I've come to admire your courage, your straightforwardness, and the job you've done for your country.

PRESIDENT BUSH: I've enjoyed working with you on a variety of issues. Lithuania's ascension into NATO is a very important part of our foreign policy, yours and mine. It's important for the people of Lithuania to know that when the United States makes a commitment, for example, Article V of the treaty, we mean it. I'm proud of the alliance we've established -- and your contribution to that alliance. 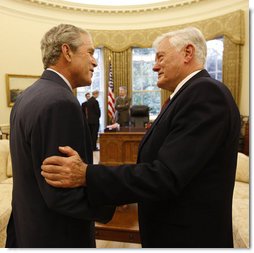 We also talked about Georgia-Russia and the need for, you know, democracies to be able to stand on their own feet without fear of bullying. And you've made some very courageous statements on that issue, and I appreciate that very much.

We talked about energy independence, and you explained to me your situation with your present power and your future strategies. And I want to thank you very much for being forthright with your strategy and understanding that the more independent you are from an energy perspective, the more independent you are from a political perspective. And I thought that was very wise, and we'll try to help you as best as we can.

And finally, our hope is that by mid-October, there will be visa waiver granted to the citizens of Lithuania. You've worked hard for that issue. And it's -- I think you can take back to your people a very positive report about this very important issue. And you and your government deserve a lot of credit for it.

All in all, I've really enjoyed working with you. There's a lot more to do in four months, and I plan on doing it. And I know you and I will be, you know, working together. So thank you very much for coming.

PRESIDENT ADAMKUS: Thank you, Mr. President. First of all I would like to express the gratitude for the entire Lithuanian nation for your constant support and if that not for you, I don't believe we would be members of NATO. And the entire security question in the region would be at doubt.

And we are building the democracy together, not by individually, state by state. And all those years I have worked with you, here, those were memorable, great years. Thank you very much, on behalf of all the Lithuanian people.