For Immediate Release
Office of the Press Secretary
September 26, 2008

PRESIDENT BUSH: Mr. Prime Minister, welcome. The United States has got a great friendship with Great Britain. And you and I have worked hard to make sure that friendship stays strong. And I appreciate you coming down from New York, and I thank you for the consultations on this current economic issue. 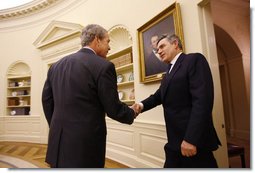 Secondly, we talked about trade. There's no stronger advocate for free and fair trade than Prime Minister Brown has been. And I appreciate your strong support for trade -- because he knows what I know, that if -- the best way to help deal with poverty and hopelessness is to give people opportunity through free and fair trade.

And so I thank your steadfast support on Doha. I told him that we are still optimistic that the Doha Round can be reinvigorated, and we strategized as to how to do that. And I thank you for your advice on that.

Finally, we talked about Iraq and Afghanistan. Both our nations still have troops in those two countries. We're helping young democracies not only survive, but grow and thrive. And I fully believe that when people look back at this period of history they will say, thank goodness the United States and Great Britain stood strong -- because we're hoping to lay the foundation of peace for generations to come.

So I welcome you back to the Oval Office. Thank you for coming.

PRIME MINISTER BROWN: It's a great privilege to be here this afternoon. I thank you for your hospitality, President Bush.

We talked about a number of issues -- Iraq, Afghanistan, the trade talks, what's happening in Russia vis-a-vis, I think, Georgia, and about the general situation in the world economy. And we contemplated on the financial issues that are being raised in every country of the world by what's happening because of financial turbulence on the markets.

America and Britain have always stood together as one in times of difficulty and challenge. And I said to President Bush this afternoon that facing this global turbulence, Britain supports the financial plan. And whatever the details of it, it's the right thing to do to take us through these difficult circumstances.

I was also able to tell President Bush that other countries whom I've talked to during the course of the last week in New York, every continent, all -- believe that America deserves the support of the rest of the world in the action it's taking to secure stability and to deal with the turbulence in the financial markets. And we will continue to support the administration and the government in everything that it's doing to try to restabilize the financial markets and to bring about economic growth in all our countries. 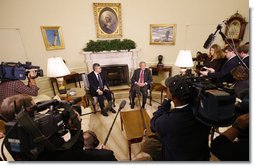 We also talked about what is the pathway forward. Our G7 finance ministers will meet on October 9th. The International Monetary Fund will meet on October 10th. And the issues that have been raised by the problems in the financial system and the principles that might underlie future policy -- good housekeeping, integrity, and at the same time, of course, international cooperation for the future -- these are all issues that will be discussed in detail by our finance ministers, and they will bring proposals for the future to us.

Stability is the first duty of governments, and we are determined that our continued cooperation will enhance the stability of our economies, and bring the prosperity that is what we want for every single citizen of the world.