For Immediate Release
Office of the Press Secretary
September 26, 2008

PRESIDENT BUSH: President, welcome. I'm pleased to be joined by President Karzai and members of his government, as we've just had a discussion with our fellow citizens, represented here on the screen. We had a real-time SVTS with PRT members in Kunar and Nangarhar provinces in Afghanistan -- plus the governors, the Afghan governors. 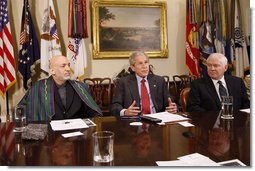 My reaction to our conversation is, one, there was promise and progress. No question it's difficult. But if you listen to the people who are actually on the ground working with the citizens of Afghanistan on matters such as agriculture, or education, or infrastructure, you'll understand why I said that there is progress and promise -- and hope.

And so I want to thank my fellow citizens, Mr. President, in your presence, for their sacrifice and service. Three of the PRT members are here -- provincial reconstruction teams. This is a central part of the counterinsurgency strategy, which combines economic development, education, infrastructure with security, all aiming to help this young democracy not only survive, but to thrive, so that it never becomes a safe haven for those would do us harm again.

I've had a grand experience in dealing with President Karzai. He and I have known each other for a long time. We -- I can remember when I was informed that our special forces rescued President Karzai during the liberation of Afghanistan. He was stuck out there wondering whether he was going to make it --

PRESIDENT KARZAI: Top of the mountain.

PRESIDENT BUSH: We sent some good troops in and pulled him out. And he has served his country then, and he's served his country now as the President. And I admire your leadership and your determination to succeed. And I want to welcome you here. I want to let you know that the United States is committed to the people of Afghanistan. We will stand by your side, and do the hard work necessary to achieve our objective. And our objective is for you to become a thriving democracy, and to deny al Qaeda and other extremists a safe haven or a base from which to launch their murderous attacks.

PRESIDENT KARZAI: Thank you, President. Mr. President, thank you very much for seeing me and my delegation once again so graciously, and tremendous hospitality, as always, in the White House.

Mr. President, my trip this time to Washington, as I insisted to be here with you, is for one reason alone, and that is to thank you and, through you, the American people for all that you have done for Afghanistan. You can't imagine here in Washington, especially at the White House, how much difference you have made to the lives of the Afghan people by your personal commitment to Afghanistan, by your commitment for the betterment of Afghan life, for the security of the Afghan people, the democracy of the Afghan people, for education and health, and all that we discussed earlier with the PRTs and the Afghan governors. 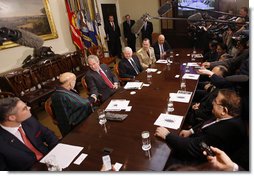 At times in this, the span of seven years, we have come across issues that gives us a feeling as if things were slowing down. That is not the impression that we have in Afghanistan. Afghanistan has made progress that we would have not been able to make in 50 years or 60 years -- what you have done in the past six or seven years. We have rebuilt in four years more than 3,000 (inaudible) of our roads. We have millions of children. We have more than 85,000 of our babies, infants, and children now saved each year. Infant mortality is down. Health care from 9 percent to 85 percent. National reserves -- from $180 million to $3.5 billion today -- over $3 billion today.

Life is better. Of course we have challenges, and the challenges will continue to face us as we move ahead. The success is already there, the picture will be completed. You will be leaving office, Mr. President, together with the Vice President, in a few months from today, but I would like you to remember as you leave office that Afghanistan will remember you tremendously, in a nice way, with affection, and you are there in our memory, in a golden place. Come and visit us so we can show it to you in a manner that we do traditionally in Afghanistan.

PRESIDENT KARZAI: Thank you very much.

PRESIDENT BUSH: Thank you, all. 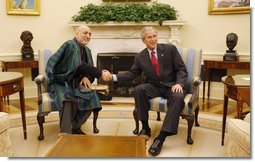