For Immediate Release
Office of the Press Secretary
September 25, 2008

PRESIDENT BUSH: It is my honor to welcome the President of Lebanon here to the Oval Office. Mr. President, there are a lot of Lebanese Americans who are paying attention to this visit. They care deeply about their ancestors. They want Lebanon to be free and sovereign and independent -- and so do I, and so do you. 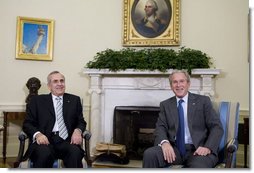 I have -- I have watched very carefully your initial statements upon being sworn in as President and your statement impressed me. And we're most impressed by the national dialogue that you're holding in a attempt to seek reconciliation. The United States is proud to stand by your side. Our mission is your mission: a country that is strong and capable, and a country where people can live in peace.

And so I welcome you. It's been a long time since the President of Lebanon has been in the Oval Office. And it has been my -- it is my honor to host you for this occasion. So I welcome you, and I'm looking forward to our dialogue.

PRESIDENT SLEIMAN: (As translated.) Well, I am delighted to be here visiting the White House and visiting with you, President Bush. I am here to thank you for all the efforts that you have undertaken in order to support Lebanon, particularly the military institutions of Lebanon.

We are also very proud of Lebanese Americans, who are around a million of them here, occupy very important position in the United States and they work very sincerely for their country here, as well as for their original homeland.

Mr. President, we share with the United States many of the human values and many of the cultural values. We promote and we believe very strongly in democracy and the principles of democracy. We believe in the promotion of liberty, all liberties, as well as the protection of human rights.

Mr. President, we work against bigotry and also try to promote [sic] it, and certainly we work very hard to combat terror. There are so many things in common between the American people and the Lebanese people.

We are here also to reaffirm our right in having a prosperous Lebanon, a democratic Lebanon, a country that it is diverse in its nature and through its people; but that in itself is wealth -- the wealth of the -- and the power of the people of Lebanon. And that adds to the value of the Middle East and the Arab world and the entire world.