For Immediate Release
Office of the Press Secretary
September 25, 2008

PRESIDENT BUSH: Mr. Prime Minister, once again, it's my honor to welcome you back to the Oval Office, and it will be my honor to share a meal with you tonight. Thank you for coming to Washington from New York. It's very kind of you to come. I appreciate your friendship and I appreciate your leadership.

One such sign of that relationship is the India-U.S. civilian nuclear agreement. This has taken a lot of work on both our parts, a lot of courage on your part. And of course, we want the agreement to satisfy you and come -- get out of our Congress. And so we're working hard to get it passed as quickly as possible.

I'll never forget my visit to your country, Mr. Prime Minister. I remember telling my friends when I got back, what an exciting place India is. There's a vibrancy and energy, and there's a entrepreneurial spirit that's very strong. And I congratulate you and your government for enhancing that entrepreneurial spirit.

I thank you for your advice on a range of matters. I appreciated very much your briefing on the neighborhood in which you live. It's very informative and it helps me make decisions and helps me formulate policy.

All in all, ours is a very strong relationship, at a state level and at a personal level. And I appreciate you coming.

PRIME MINISTER SINGH: Mr. President, I know how busy you are with problems relating to the management of the financial crisis. That despite all these enormous pressures on your time you have found it possible to receive me is something I deeply appreciate, deeply value. And the last four-and-a-half years that I have been Prime Minister I have been the recipient of your generosity, your affection, your friendship. It means a lot to me and to the people of India.

In these last four-and-a-half years there has been a massive transformation of India-United States relations. And Mr. President, you have played a most important role in making all this happen. Your efforts, your cooperation with regard to civil nuclear energy -- I know these were difficult issues and at each stage it was your leadership, your personal intervention which resolved all the difficulties that were affecting the progress of this negotiation.

I sincerely hope that the settlement which is now before the U.S. Congress will be approved in a manner which will be satisfactory from the point of view of both our countries. And when history is written I think it will be recorded that President George W. Bush made an historic goal in bringing our two democracies closer to each other. 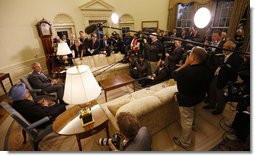 I am mentioning civil nuclear initiative because for 34 years India has suffered from a nuclear apartheid. We have not been able to trade in nuclear material, nuclear reactors, nuclear raw materials. And when this restrictive regime ends I think a great deal of credit will go to President Bush. And for this I am very grateful to you, Mr. President.

But there has been enormous confirmation in our relationship in many other respects. The United States is India's largest trading partner. The United States is the largest investor in our country. And at President Bush's initiative, we set up a two-country -- forum which has come forward with many innovative ideas which bring the business communities of our two countries closer to each other.

We have taken new initiative in the field of education. We have today a new architecture of bringing the academic communities of our two countries, the new school of Fulbright-Nehru Scholarship reunite the intellectual community of our two countries in a manner which gives me immense satisfaction.

So, Mr. President, this may be my last visit to you during your presidency, and let me say, thank you very much. The people of India deeply love you, and all that you have done to bring our two countries closer to each other is something history will -- (inaudible.)

PRESIDENT BUSH: Thank you, sir. Thank you very much.