For Immediate Release
Office of the First Lady
September 25, 2008

MRS. BUSH: Last year, I presented this award to the family of another First Lady -- one First Lady that I've always admired -- Lady Bird Johnson. I'm honored to join her company tonight as the second recipient of the National Park Foundation's Founders Award. Thank you all very, very much. (Applause.)

And thanks to Regan and Roland for your very kind words tonight. Thanks to everybody that's here that was in the video. That was really great to see the superintendents and the kids. And thanks very much for that lovely video. 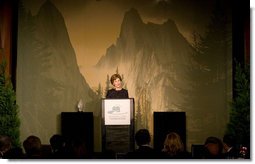 Thanks to all of the national park fans, nature enthusiasts, history buffs, and the rest of our distinguished guests tonight.

Maybe you remember your first camping trip in a national park -- awakening to chirping birds and the light of a new day, or awakening to the crash of thunder and a torrential downpour and it flattens your tent. (Laughter.) You might remember watching a teenage moose walk through your campground, or wearing goggles and a bandana over your nose and mouth to protect yourself against a sandstorm in the Grand Canyon. You might remember being startled when a tree fell right next to your cabin -- interrupting a cozy bridge game on a rainy night. And you probably don't remember this, but I remember watching the Secret Service sprint towards the crash site in great alarm. (Laughter.)

All of these things happened to me and my childhood friends who I hike with every year in a national park. And it was through one of these childhood friends, Regan Gammon, who you just met, that I learned about the National Park Foundation. I'd traveled in our parks for years, but I didn't know anything about the foundation until a very smart park superintendent -- Suzanne Lewis from Yellowstone -- nominated Regan to serve on the National Park Foundation board.

I now know now that the National Park Foundation is the philanthropic arm of the National Park Service. Its work allows individual citizens, foundations and corporations to help protect their favorite natural and historic landmarks. And the National Park Foundation is helping our young people grow up as good stewards of their environment through programs like First Bloom. Today, I joined students for a First Bloom activity at the Hamilton Grange National Memorial, which is Alexander Hamilton's historic home. This house, which is still on property that once belonged to Alexander Hamilton but is now a city site on 141st street, is being refurbished and restored by the National Park Service, including a national park restoration architect and a national park landscape architect.

Fourth-graders from a nearby school gathered there together. They're helping with the relandscaping at this location in Harlem between row houses and high rises. They're helping to plant native plants and learn about the local wildlife.

Over the coming months, they'll work with park rangers, the National Park Foundation, and the staff from Harlem Boys and Girls Clubs to plant historic gardens that will restore the lawn around Alexander Hamilton's home.

The students I met with today showed me seeds of Black-Eyed Susans and other wildflowers that they'd planted in compostable cups. They described how they're mapping out landscaping for the park and studying the soil to determine which plants it will sustain. And of course, we took part in one of my favorite First Bloom activities: Shake-A-Shrub. (Laughter.) Students literally shake a shrub and identify all the bugs and seeds that fall out. One boy handed me a spider that he had found, which prompted a search by all the other students for other interesting pieces of dirt or bugs that they could give me to hold. Fortunately, the students' enthusiasm was contagious, and the spiders didn't bite. (Laughter.)

The Hamilton Grange National Memorial is one of First Bloom's newest sites and one of three major First Bloom sites here in the city.

In April, I joined students from the Boys and Girls Club of New York and the Lower East Side Girls Club at another site in Battery Park. Young people there spent weeks searching for native plants, identifying invasive species and carefully designing their gardens. Today, thousands of tourists can enjoy the two gardens these students planted on the way to New York's most famous park: the Statue of Liberty.

From New York City to Los Angeles, First Bloom is helping kids get their hands dirty -- and fall in love with America's parks. The program is just one way the National Park Foundation encourages our youngest citizens to gain a personal stake in our oldest treasures.

Another important part of the program that the National Park Foundation supports is the Junior Ranger program. This program guides hundreds of thousands of children through their favorite national park and helps them learn more about the park and its history. We hope that some of these Junior Rangers will actually grow up and become real park rangers.

First Bloom and the Junior Ranger program wouldn't be possible without the support of private citizens like each one of you. The people in this room have joined a long tradition of philanthropy in America's parks -- one that includes some of our nation's most famous donors, like John D. Rockefeller and Paul Mellon, and some of our nation's youngest donors, like schoolchildren who donated pennies toward the restoration of the Statue of Liberty in the 1980s.

Private contributions are especially important now as we prepare for the 100th anniversary of the National Park System in 2016. Last year, the National Park Foundation hosted a Leadership Summit on Partnership and Philanthropy in Austin, bringing together corporate leaders, philanthropists, and park experts to encourage continued support of America's parks.

President Bush has issued a Centennial Challenge in honor of the Park System's upcoming milestone. He's called on individuals, foundations, and the private sector to contribute to improvements in our national parks. These new funds would help restore native plants to our parks, remove invasive species, save sea turtles, install solar panels, and much, much more.

Park Historian Barry Mackintosh wrote that, "Philanthropy is more than a source of land and money for parks. It's a means of building and strengthening bonds between parks and their advocates." For more than 40 years, the National Park Foundation has been leading this cause as the only national charitable partner of America's parks. National parks are the backdrop for many Americans' favorite memories -- including mine. Together with the National Park Foundation, we can preserve these national wonders and ensure park visitors make new memories for generations to come.

Thanks to everyone here for your love of our national parks and for honoring me tonight.