For Immediate Release
Office of the Press Secretary
September 23, 2008

PRESIDENT BUSH: I just had a very productive meeting with President Museveni of Uganda. He is -- he's been a very strong leader on a number of fronts. First, he's been very helpful in solving regional conflicts on the continent of Africa, and I want to thank you for your leadership.

Secondly, you gave me great confidence when it came to realizing the proper strategy in dealing with HIV/AIDS, because of the success in Uganda that showed the rest of the continent and the rest of the world how strong leadership and a good strategy can actually save lives in a very substantial way. The ABC program was implemented in your country -- infection rate went from a lot to, you know, a much smaller number. 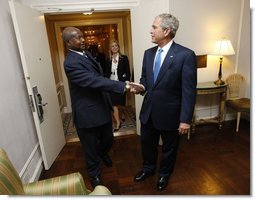 I also want to thank you very much for implementing the Malaria Initiative. There's been over 200,000* bed nets distributed in your country, Mr. President, and that's because of the leadership of you and the organization of your government. And so I thank you for coming by for what has been a very productive meeting.

PRESIDENT MUSEVENI: Thank you, sir. Well, I thank President Bush for the support he has given Uganda through the AIDS fund, for the development contribution. That's how our people are able to get free ARVs, antiretrovirals. Many people have access to these drugs now. In fact, almost all the people that need to have them, have access to the drugs, do so now in the case of Uganda.

You should know that not everybody who has got AIDS needs to start on the ARVs; there's a certain threshold of resistance below which he should be able to access the drugs. And because of the money President Bush has provided, and also the money from the Global Fund, all our people who need to access ARVs do so now.

Then there's also the Millennium Challenge Account, although I don't fully access that money, but we have got a part of it. And that one is also very helpful.

Then there's the general support through the World Bank and other very helpful programs like USAID, supporting infrastructure. Because what we need in Africa is to lower the cost of doing business in Africa through investing in infrastructure and energy and (inaudible), so that we can be able to attract FDI, foreign direct investment. This is really the way forward. And President Bush has been tremendous on that. He has actually been a very good friend of Africa and we salute you, our gratitude.

I thank you very much.

*There have been over 2.2 million bed nets distributed in Uganda.