For Immediate Release
Office of the Press Secretary
September 20, 2008

PRESIDENT BUSH: Mr. President -- Mr. President, members of your delegation, members of my Cabinet, members of the United States Senate and United States Congress, honored guests: Welcome to the White House. Laura and I are really pleased you all are here. Our nations share a faith in liberty, a willingness to defend it, and a confidence that freedom will define the future for our region. The American people, Mr. President, are proud to call the Colombian people our friends and our allies. (Applause.) 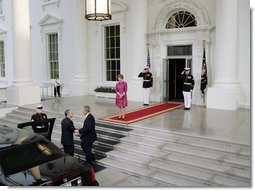 You, Mr. President, are a strong leader. You and your government and the Colombian people have shown courage in freedom's cause -- by taking on the terrorists and the drug lords. This summer, our nation was impressed by the daring rescue of 15 hostages -- three of whom were American citizens. We appreciate your leadership. (Applause.) We are pleased to be your partner in strengthening the rule of law, and combating the illegal drug trade, and helping victims of violence rebuild their lives and communities.

We're also partners in the spread of prosperity. We have negotiated a fair free trade agreement that will benefit families and businesses in both our nations. And I appreciate your strong advocacy for this agreement. And my sincere hope is that the United States Congress will pass the Colombia free trade agreement as soon as possible. (Applause.)

Mr. President, Laura and I warmly remember our visits to your beautiful country. We were honored to visit a city liberated by the great Simon Bolivar. And in that visit we were honored to be with you and your lovely wife.

And so tonight I want to propose a toast to our friendship, the friendship between our countries. May God bless Colombia and may God bless the United States.

President Bush's father began the work for the unilateral preferences. After that, the democratic administration of President Clinton continued to this initiative. President Clinton and my predecessor, President Pastrana, began with Plan Colombia, that has been very useful for our two countries. 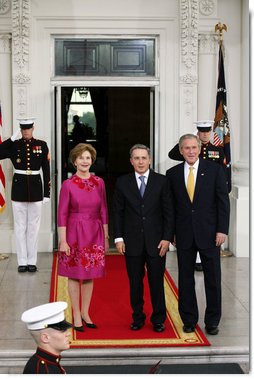 Let me say this, President Bush, it has been impossible for our administration to find someone as you, as your leadership, with your strong support to our policy. Thank you for your advice, thank you for your support at the right time. Any success Colombia could have harvested during our administration is in great portion because of the help of the United States, because of the help of your Congress, of your people, of your Cabinet, and particularly because of your personal help, President Bush.

With patience, with constancy, we will get approval of this free trade agreement. This is not the end of our relationships. This is one step forward to move closer and closer in the democratic brotherhood of these two nations. 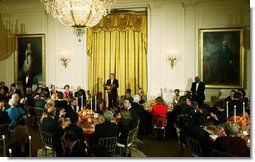 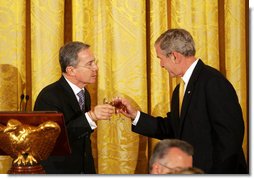