For Immediate Release
Office of the Vice President
September 19, 2008

Vice President's Remarks at the 145th Anniversary of the Battle of Chickamauga
McLemore's Cove
Chickamauga, Georgia

THE VICE PRESIDENT: Well, thank you very much. Thank you very much, and let me thank you, Ed, for the introduction, and all of those who've done so much to make this great event a success. It's an honor to be with all of you this afternoon, and to visit America's first national military park on this very important anniversary. My appreciation, as well, to the outstanding Color Guard from the Citadel. 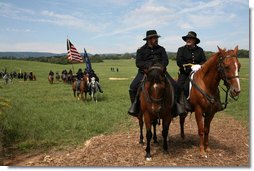 Let me also acknowledge the re-enactors and distinguished guests from across America; program organizers; and the men and women who look after the Chickamauga and Chattanooga National Military Park. I've just come from Washington this morning, and I bring greetings to all of you from the President of the United States, George W. Bush. (Applause.)

I also brought with me this morning three outstanding members of Congress: your Senators from Georgia, Saxby Chambliss and Johnny Isakson; and Congressman Zach Wamp from just over the border in Tennessee. Gentlemen, pleased to have you with us. (Applause.)

Like so many of you here, I am a follower of military history, and as a descendant of a man who served at this very place, this obviously has special meaning to me. Above all, I join you as a fellow citizen, who feels proud of the bravery shown among these hills and valleys exactly 145 years ago.

As you've been told, my great-grandfather was here during that fateful struggle, as a member of Company B, of the 21st Ohio Volunteer Infantry. Later today I'll pay a tribute at the monument of that unit, in a ceremony put together by my good friend Brad Quinlan and the fellow re-enactors of the 21st Ohio. I've enjoyed getting to know these gentlemen over the years. They've helped me to learn a good deal more about the war and about my family history. And I was delighted to make it possible for them to march in front of the White House in January of 2005 as part of the Presidential Inaugural Parade.

A few moments ago you heard a brief mention of my great-granddad's military career. I know that his years of service meant a great deal to him. As evidence, I point to the fact that Samuel Fletcher Cheney named two of his sons after his favorite generals, Thomas and Sherman. With that choice of names, no one had to guess that Sam was on the Blue team. His son Thomas was my grandfather.

You might ask what ever became of Sam Cheney. Following his military service, he took up farming, and became a partner in a saw mill company in Defiance, Ohio. After a bad economy sunk that business, he loaded up the family and headed for Nebraska, where he acquired a farm under the Homestead Act. Everything went fine until 1890, when drought wiped him out and he lost everything once again. But he kept on striving, eventually took another homestead farther west, and was proving it up at the time of his death in 1911. 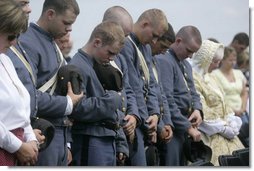 No one is left who remembers Sam Cheney, and he didn't leave much behind in the way of possessions, either. But we have the sword he carried at Chickamauga and throughout the war, and we have a picture of him in his uniform from that era. From the expression on his face, he looks like a sturdy, determined man -- and he must have been, because the world threw a lot at him. In a long life he fought in the Civil War throughout its length; he had lost four fingers on his left hand in a saw mill accident; went broke twice; raised his family in a sod house on the Nebraska prairie; worked in the fields past the age of 80; and outlived two wives. There had to be some iron in that old fellow. (Laughter.)

I'm also happy to relate that Sam Cheney is more than just a name from the past. It's also the name of our 16-month-old grandson, whom I assure you is just as determined in his own right. (Applause.)

I hope to come back here some day with Sam and his cousins. Lynne and I went to our first Civil War re-enactment with our daughters a good many years ago. It's a tremendous experience, and we heartily recommend it to our fellow citizens. Civil War battle re-enactors aren't just people who like to make noise and fire off black powder -- although that's a pretty good thing to do. What they want to bring to an observance like this is a sense of history. They want to have a glimpse of the past as our ancestors would have seen it. They want to keep alive the camaraderie that sustained units of men, kept them strong, and held their spirits up even in moments of struggle and desperation. The re-enactors among us today are paying homage to the memory of everyone who got into that fray -- and especially to the ones whose lives ended in these woods.

Many here today know the pride of claiming an ancestor who stood, and perhaps fell, at Chickamauga. I'm told James Shanks, who this day will carry the regimental colors of the 21st Ohio, had two family members mortally wounded here within five minutes of each other.

All of us know this as the place where Bragg and Rosecrans faced off, in the most intense fighting on the western front during the war. This is the place where names Longstreet and Thomas gained fame, and many thousands of young men covered themselves with glory. Here, at this hour, 145 years ago, little could be heard above cannon fire, rifle shot, and bugle calls. One young private said, "The balls whistled around our ears like the escape valves of ten thousand engines." Others told of soldiers firing "so ruthlessly that at times the powder clogged their revolving rifles, or the sparks from shells set the grass on fire[.]" The very idea of men firing cannons at each other at a distance of 100 yards has been compared to "two men in a room throwing paving stones at each other."

It was violent, and terrifying, and brief. And the overall losses at Chickamauga were, and are, difficult for the mind to absorb: more than 34,000 dead, wounded, and missing -- all of this in a little more than 48 hours. Some units were so heavily affected that not a single officer was left standing to command the remnant. On September 22nd, General Bragg told his surviving troops, "[Y]our task is not ended. We must drop a soldier's tear upon the graves of the noble men who have fallen by our sides and move forward."

Before the year 1863 was out, there would be more fighting here, many additional casualties in the "Battle above the Clouds" at Lookout Mountain, and at Missionary Ridge, and in the fight for Chattanooga. Afterward, the war kept on for another 16 months. My great-grandfather, and many of yours, stayed in it to the end, and were fortunate enough to muster out and start life all over. But the deeds that were carried out here, and the heroism that marked these battles, have ever since been well known and spoken of throughout both North and South. As to the sacredness of these grounds there was never any division of opinion. This land, so beautiful to look at, also became a place set apart, with many hundreds of monuments, markers, and tablets.

The 19th of September has come around again 145 times, always drawing people here to reflect on those events of 1863. And some of the anniversary gatherings have themselves been remarkable, worth recalling. In 1889, more than ten thousand veterans of both sides met here. In two days of ceremonies, they shared a gigantic barbecue, smoked peace pipes, and saw General Gordon and General Rosecrans embrace and call each other comrade.

Theodore Roosevelt was here on the 7th of September, 1902. He was excited to see the place, and he wanted to survey the field by horseback. He mounted up a Kentucky-bred charger, joined by a big group from the Seventh Cavalry. According to a newspaper account, "the President started his horse at a sharp trot, and for a mile and a half led the regiment on a merry chase over the battlefield." He set a pace so fast that some of the troopers bounced off their horses and got a little scratched up. Afterward, TR said, "There are some recruits in the regiment. It was good practice for them."

Possibly the greatest gathering of all was the 50th anniversary re-enactment here in 1913. It was called "the first reunion of Northern veterans ever held in the real South," and the Grand Army of the Republic received an enormous welcome. Veterans of the Blue and the Gray, most of them in their 70s with white hair and beards, gathered together under the slogan, "One People, One Nation, One Flag." Perhaps among those present was Johnny Clem, who'd worn the uniform at age 10 and became known as the "Drummer Boy of Chickamauga." He always enjoyed telling of his experiences on the battlefield -- a small boy dressed up, carrying a rifle like a man. But at one reunion somebody came up to him and said, "You ought to have been spanked." Johnny Clem laughed and agreed.

As it turned out, the drummer boy spent his entire career in the Army, and lived until 1937. From then on, the ranks grew very thin, and the last veterans of the Civil War are now, of course, long gone. Yet they remain, this day and every day, as an example to us all. We know them still as men who stood valiantly and placed a higher value on duty than on their own lives. They are an example, too, of patriotism and moral character: For they had faced each other in a terrible battle -- but when the issue was closed, they reconciled as brothers and citizens of a reunited country. And that reunited country is now the greatest nation on the face of the earth. (Applause.)

Maybe the finest words about the legacy of Chickamauga were spoken by Theodore Roosevelt in 1902. He said, "I fail to see how any man can come here and look upon these evidences and not go away a better American, prouder of the country; prouder because of the valor displayed on both sides in the contest, the valor, the self-devotion, the loyalty to the right as each side saw the right." 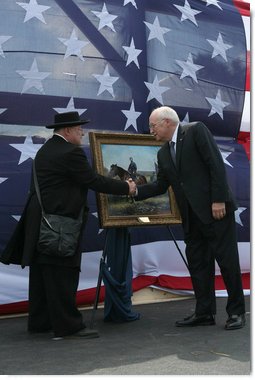 That legacy lives on. Whatever it was about this land that produced such brave souls back then, I'm glad to say we still have it. In the year 2008 we are a nation at war. And the ones fighting that war are doing their jobs with incredible courage and daring. We're proud of them, grateful to each one of them for serving America.

In every generation following the Civil War, the people of our country, military and civilian, have been stirred by tales of valor from those years of ordeal. And so many of those stories were lived out in this very place. President Dwight Eisenhower, a career officer himself, once said, "Military history records nothing finer than the courage and spirit displayed at such battles as Chickamauga[.]" All these years later, it is amazing and inspiring to think about the history that was made in this corner of America. And it is a true privilege for each one of us to stand on such honored, hallowed ground. May our nation never forget the valor of the Blue and the Gray at the Battle of Chickamauga. (Applause.)