For Immediate Release
Office of the Press Secretary
September 19, 2008

THE PRESIDENT: Welcome to the White House. (Applause.) Please be seated. So, Celtic Pride is back. (Applause.) So a friend of mine, who is a huge Celtics fan, said, why don't you call it the "Boston Three Party"? I said, because it took a team to win. And I welcome the Boston Celtics team that has brought great pride to the Boston area. You know, I was telling them, I went to school up there. And those were the days when the Celtics were awesome. And there was a little bit of a drought, but sure enough that drought ended -- with the NBA championship. And I welcome you all to the White House as NBA champs. 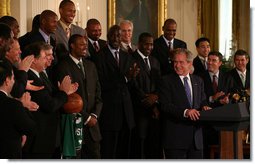 I do want to say congratulations to the owners. You might recall I was an owner of a baseball team, and never knew what this felt like. (Laughter.) Wick Grossbeck, Irv Grossbeck, and wives; Steve Pagliuca; Bob Epstein -- these all say "managing partner." You got a lot of managing partners. (Laughter.) But that's good. I know you're proud and I know you're thrilled to -- being here. I congratulate the general manager, Danny Ainge. I -- Rick Gotham, the team president who is with us; Doc Rivers -- this guy can coach. (Applause.) And coaches -- and coaches.

I congratulate the -- all those who work in the organization for joining us. Welcome to members of Congress. Glad you all are here. I welcome members of my administration who have come; members of the United States Armed Forces who are with us today -- (applause) -- Boston Celtics fans who are with us today. (Applause.) I don't think we've had this many fans since St. Patrick's Day, Senator. (Laughter.) And finally, and most importantly, the players who brought the championship back to Boston. Welcome. Congratulations to you. (Applause.)

It's amazing how sports works, isn't it? At the beginning of last season, few would have predicted how this season would have ended. After all, the Celtics had finished with the second worst record in the NBA. And the two-decade championship drought was pretty likely to continue -- at least that's what the experts said. There's a lot of experts in life these days -- hadn't noticed. (Laughter.)

Except the owners were determined to win. They said, we're going to bring a winner for our fans. These are fan-oriented owners who understand that a sports franchise is only good as its fan base. And then you hired a general manager who knew what it meant to be a champion. You didn't hire him; he's been there for a while. But he knew what it meant to be a champion. After all, he's from the 1986 championship team. And he knows there's something special that needs to be put together to make a team work, and that's Danny Ainge.

And so during the offseason, he figured out the need to bring maybe some new blood -- or some old new blood. (Laughter.) Well, older new blood. And of course, you know, the famous trades were made for -- the famous pickups were Kevin Garnett and Ray Allen. And these guys are awesome players. But Danny Ainge would be the first to tell you -- by the way, the NBA Executive of the Year would be the first to tell you, it takes an entire team to win a championship. You bet these two people were awesome additions to the team, but it required a bunch of people playing together for the common good to win. 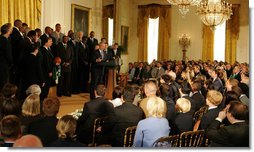 And that's what Doc Rivers did. See, this guy is -- I've known him somewhat. He's a good man. He brought character to the clubhouse. He brought unity to the team. And he helped bring the championship back to Boston.

The team got off to a fast start; they won the first eight games and they never looked back for 66 wins -- the NBA's best record. And then you got in the playoffs, which didn't exactly go as smoothly as some people thought -- (laughter) -- but nevertheless, when it came time to defend your home court, this team figured out how to do it.

And then, of course, the L.A. Lakers in the finals. For baby boomers like me, that is the -- that was a reminder of a great basketball rivalry. So, like, Boston fans were screaming, "Beat L.A.!" at the top of their lungs, and that's exactly what this team did in six hard-fought games. If you're a basketball fan or a sports fan, it was really awesome to watch, wasn't it? If you're a Boston Red Sox fan it was doubly awesome to watch -- (laughter) -- Boston Celtics fan -- man, you were in heaven. (Laughter.)

Despite his knee injury early in the series, this team's captain Paul Pierce played with courage. You know, leadership comes in all different kinds of ways. Playing hurt in a championship game is the ultimate sign of leadership. And that's why he won the MVP honors for the NBA finals. And that's why the league calls him "The Truth." This team calls him the captain. (Applause.)

It is safe to say that everybody on this team contributed to the championship. You know, not enough focus has been put on, until the end, the depth of the bench on the Boston Celtics. They had a lot of players come off the bench to make a huge difference, and although the three big names, three great NBA players were there, but the real strength was the depth of the roster, I think. And I think most of the basketball experts will tell you that's the case. So I congratulate all of you for contributing to something that was very important. We'll remember your stifling defense, we'll remember your sharp shooting and the way -- we'll remember the way you played together as a unit, as a team. 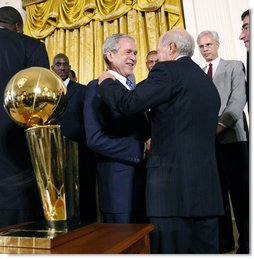 I appreciate very much the use of the word "ubuntu." I don't know if you know what that's talking about here. Probably most people outside Boston don't. It is a African word for unity that they declared when they broke the huddle. I've been looking forward to saying that with a Texas accent. (Laughter.) Ubuntu. Yes. (Applause.)

I'm proud of your character. I want to thank the Celtic organization for what you do off the court as well. I believe there is a huge responsibility not only to try to win on the court but to be responsible citizens in the community in which you live. The Shamrock Foundation, for example, helps disadvantaged children during the season and after the season. I appreciate the fact that during the second quarter of every home game, the Celtics honor some caring citizen; someone who I said is a soldier in the army of compassion. With the "Hero Among Us" program, that's a really good idea, and I thank you for doing that. I want to congratulate you for worrying about children and literacy and using your special status in society to set a good example.

Most of all I congratulate you for being champs. I wish you all the very best for the next season. Should you win it, you can find me in Texas. (Laughter and applause.)

Congratulations. Congratulations, and now it is my honor to bring to the podium "The Truth," team captain Paul Pierce. (Applause.)

MR. PIERCE: We just want to say it's truly an honor to be here in your house today. And on behalf of the Celtics organization, we'd like to thank you. And from what I hear, you played a little high school basketball yourself. So we're going to honor you with a basketball signed from our team.

Q And a jersey, Celtic jersey with a 43 on it -- even those that's Kendrick Perkins's number. (Laughter and applause.) And he's from Texas. So that's why we gave you 43. (Laughter.)

No, but for real, in honor for you being the 43rd President, we'd like to present this to you. And also, on behalf of the families and the victims in Hurricane Ike, the organization would like to also present a check for $100,000 to the Red Cross relief. (Applause.) 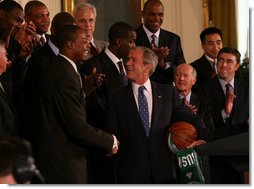 So once again, we'd just like to say thank you, and it's truly an honor.

THE PRESIDENT: Thank you, sir. (Applause.)