For Immediate Release
Office of the Press Secretary
September 17, 2008

THE PRESIDENT: Good evening, and welcome. Over the past eight years, we have made the Iftaar dinner an annual tradition here at the White House. And I'm really glad we did. At this year's gathering, we pay special tribute to the many contribution Muslim Americans have made to our nation. We join in wishing Muslims around the world, "Ramadan Mubarak."

Mr. Prime Minister, welcome. We're honored you're in our midst. Congressman Keith Ellison, Congressman André Carson are with us. Members of the administration here tonight; members of the diplomatic corps -- we are glad you're here; my fellow citizens. Major, I'm looking forward to the blessing. Thank you for being here with us today. 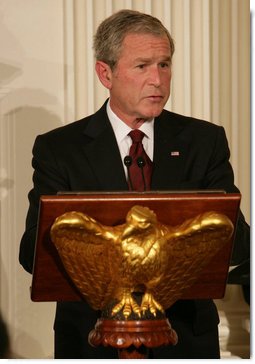 According to the teachings of Islam, Ramadan commemorates the revelation of God's word in the Holy Koran to the prophet Mohammad. The word has become the foundation for one of the world's great religions. Today more than a billion Muslims around the globe celebrate the month of Ramadan with daily fasting, heartfelt prayer, and acts of charity.

During Ramadan, we are reminded of Islam's long and distinguished history. Throughout the centuries, the Islamic world has been home to great centers of learning and culture. Muslim thinkers and scientists have advanced the frontiers of human knowledge. People of all faiths have benefited from the achievements of Muslims in fields from philosophy and poetry to mathematics and medicine.

At the beginning of a new century, Muslims in the United States are continuing this proud tradition of innovation and invention. Tonight we honor members of the Muslim community who've risen to the top of their professions. Among our guests are individuals with wide-ranging accomplishments -- from working on the Apollo Program, to pioneering advances in healthcare and medicine, to developing cutting-edge applications for the Internet.

One of these innovators is Professor Maysam Ghovanloo. This immigrant from Iran has become one of our nation's most ingenious biomedical engineers. Last month, the good professor and his team of researchers at Georgia Tech unveiled an incredible invention that could one day help people with severe disabilities operate wheelchairs and surf the Internet by simply moving their tongue. Through this pioneering research, this good professor has brought new hope to thousands. He, like others in this room, have earned the admiration of our citizens.

Stories like the professor's remind us that one of the great strengths of our nation is its religious diversity. Americans practice many different faiths. But we all share a belief in the right to worship freely. We reject bigotry in all its forms. And over the past eight years, my administration has been proud to work closely with Muslim Americans to promote justice and tolerance of all faiths. 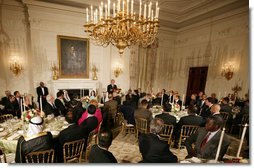 We've also partnered with Muslims around the world to spread freedom to millions of people who have never known it before. We're helping the people of Iraq and Afghanistan build free societies after decades of tyranny. And during the month of reflection, we will remember all the brave Muslim Americans who wear the uniform of the United States Armed Forces. They represent the best of our nation. I'm honored to be their Commander-in-Chief.

I thank you for joining us tonight. I wish you all a blessed Ramadan. And now the Imam will say the blessing.