For Immediate Release
Office of the Press Secretary
September 15, 2008

Welcoming the President of the Republic of Ghana

PRESIDENT BUSH: Good morning. I'm pleased to be here with my friend, the President of Ghana, John Kufuor of Ghana. We just had a very good discussion and before I summarize it I do want to say a word about the U.S. economy.

I know Americans are concerned about the adjustments that are taking place in our financial markets. At the White House and throughout my administration, we're focused on them -- and we're working to reduce disruptions and minimize the impact of these financial market developments on the broader economy. 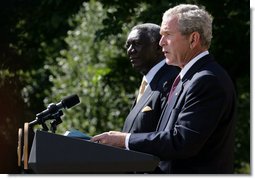 I've been in close touch with Secretary Paulson throughout this weekend and this morning. I appreciate the work the Treasury Department, and the Federal Reserve, and the Securities and Exchange Commission, and major financial institutions here and around the world are doing to promote stability in the financial systems.

As policymakers, we're focused on the health of the financial system as a whole. In the short run, adjustments in the financial markets can be painful -- both for the people concerned about their investments, and for the employees of the affected firms. In the long run, I'm confident that our capital markets are flexible and resilient, and can deal with these adjustments.

I admire President Kufuor, and the reason I do is because he has shown the world that democracy can flourish on the continent of Africa. He's been a steady and principled leader. We're soon to leave office, but I'm going to finish strong -- and I know you are, as well.

We had a good discussion about important issues, such as fighting disease. One of the initiatives that we're working on together is the fight against neglected tropical diseases. And the President brought me up to date on the strategy to deal with that important issue and how we can help.

We're talking about, obviously, fighting malaria. And the good news is, is that this is a government that's very capable of taking American help and converting it into the kind of results that we all expect.

We talked about education and economic opportunity. The United States supports vital educational partnerships in Ghana. We're training teachers. We've issued 6,000 scholarships to girls. Under the President's leadership the education system is improving and we're glad just to be a small part of that, Mr. President.

One of the most important initiatives of this administration has been the Millennium Challenge Account. It's an opportunity for the United States government to help countries that govern justly and invest in the health and education of their people and believe in market economies. Ghana is such a country. And as the President mentioned in the welcoming ceremony, we're soon to begin spending $547 million to renovate schools, increase agricultural productivity, expand infrastructure, and support rural development.

The conclusion of the Millennium Challenge Compact, Mr. President, is a testament to your leadership, and I'm very comfortable in telling the American people that this will be money well-spent. 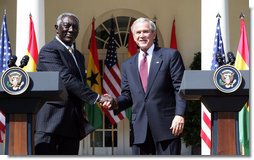 The President has been very strong voice for peace. We talked about Darfur. I appreciate very much Ghana's 11 U.N. peacekeeping operations that are ongoing. He has been a good, steady voice for strong leadership and for conflict resolution -- witnessed by the fact that they were great on the U.N. Security Council, and thank you for your leadership there.

And so I welcome you here. Laura and I are looking forward to having you to dinner tonight. I promise not to unleash the dance moves -- (laughter) -- that I first displayed in Ghana, in what was one of the most memorable trips of my presidency.

And so we're sure glad you're here. Welcome. (Applause.)

PRESIDENT KUFUOR: Thank you very much. Mr. President, I want to use this opportunity to express the deep appreciation of my nation and myself to you, as President of the United States, and to your great nation, for the supports we've benefitted in our relationship with you.

The two countries have been friendly since Ghana attained independence in 1957. But I believe, under our watch this relationship has been taken even higher --

PRESIDENT KUFUOR: -- and has translated into many supports affecting all aspects of our national life in Ghana. A typical example is the Millennium Challenge Accounts by which Ghana received, or is receiving, $547 million to modernize and commercialize agriculture. You would appreciate the importance of this gesture from the United States when you know that about 60 percent of the Ghana population is rural and depends on agriculture.

So far much of our agriculture is subsistence, meaning farmers just scratch (inaudible) to feed themselves. But with the advent of the Millennium Challenge Accounts, we want to move the farmers on to more scientific and technological agriculture, and thereby empower them more and make agriculture worth pursuing for the youth.

We are suffering as an economy adrift, very serious drift of the youth from the rural parts to the urban areas, which have not been planned to accommodate the drifts. And so now in our streets in the big towns you have street children. We believe the success of the Millennium Challenge Account will help stem all this anti-social developments.

PRESIDENT KUFUOR: If you look at the malaria support from the United States, our country in the old times was dubbed the white man's grave. It was malaria infested and the Europeans who first came along our coasts just didn't last. This disease continues to plague much of Africa and perhaps is the biggest killer -- even bigger than HIV/AIDS -- of our people on the continent. The hefty support we are getting from the United States and under your watch is very welcome and we hope to take it even further, again employing technologies and more scientific research.

In terms of trade, your country, I would say, holds the hope. We in Ghana trade in your currency, for instance. So with the current difficulties, naturally we also are affected. So we can only wish that your country rallies quickly to find solutions so that much of the world would be saved the trauma that we are going through.

If you take the current situation of rapidly increasing food prices and crude oil prices, which are subverting all the efforts we are trying to make to put our economies together, we believe the developed as well as the developing countries should feel that we are in the boat together and that we must learn to sail together, or perhaps we sink together.

Again, with the climatic change, here I have to express condolences and sympathy to the United States for what you are suffering down south in your country, especially in your state of Texas now.

PRESIDENT KUFUOR: But you must know you are not alone here.

PRESIDENT KUFUOR: On the continent of Africa, as elsewhere in Asia, we are victims of the changes of climate. But this, again, should show humanity that perhaps we all belong together more than we want to admit. If we are going to make a dent on the problems caused by the climatic change, we need to be able to marshal scientific and technological knowledge and resources in which your country, the United States, must play leadership.

So look to you to readily put abroad your resources, ethically and selflessly, so all of us will see how to contain the challenges of global climatic change, which again, should make us aware that perhaps we are already into the global village and which we should share common values and sense of humanity -- forget about the race; forget about the ideology; forget about the religion -- it's humanity that is at risk. And the United States definitely is in the forefront -- or must be in the vanguard of trying to find solutions to save mankind.

But at bottom, Ghana is very grateful for the friendship she is enjoying from the United States. And I, personally, am very happy and appreciate your friendship so far, and I look forward to a good and productive retirement, just as I wish for you, as you go into retirement. (Laughter.)

PRESIDENT KUFUOR: You have been good and I hope history will judge you well. Thank you very much.