For Immediate Release
Office of the Press Secretary
September 15, 2008

Welcoming the President of the Republic of Ghana

PRESIDENT BUSH: Mr. President, and Mrs. Kufuor, and family members; members of the Cabinet, Mr. Vice President; members of Congress; distinguished guests: Thank you all for coming. Laura and I are really happy to host you tonight. And we're particularly happy to host President Kufuor and Mrs. Kufuor. After all, we were in their country last February, and it was a unbelievable visit -- in spite of my lousy dancing. (Laughter.) Mrs. Kufuor was my partner, and she can testify to my lousy dancing. (Laughter.) 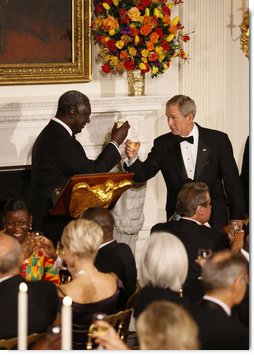 We really do want to -- I hope you relax tonight for this special evening. After dinner we'll go out to the Rose Garden for a -- interesting entertainment.

John and I will be joining the Ex-Presidents Club in a couple of months. (Laughter.) But I am confident we have left behind an enduring relationship between our two countries. We are -- we worked hard to help the people of Ghana. Because of his integrity and because of his leadership, I was confident in proposing the Millennium Challenge Account for the country of Ghana.

We're working hard to fight disease together. In this room are compassionate people who care deeply about the citizens of your country, John. And we want to thank you for your compassion and thank you for coming. We care deeply about the education of people all across the globe. John, you've helped your people build a thriving democracy, where the rule of law is respected. And as well, you've taken a leadership role on the continent of Africa.

I thank you for your wise counsel and your judgment on how the United States can work to promote peace. I really have greatly enjoyed serving with you in an historic era. I have confidence that the next Presidents of both our countries will be able to work together.

In the meantime, I offer you a toast. I wish you all the best in your retirement. I have loved being in your presence. And so, a toast to the President and his gracious wife, Theresa, and the people of Ghana.

PRESIDENT KUFUOR: Mr. President, and Mrs. Laura Bush; distinguished ladies and gentlemen. I think after two speeches today already, I shouldn't do a third one, especially in this atmosphere in which I feel so at home and so among friends. What is left for me to say is that, from my experience of this leader of the United States over the past seven and a half years, I'm forced to conclude that he's a great man, he's a strong man, a very compassionate man. And he's helped Africa in ways that perhaps would list him as perhaps the most supportive of the American Presidents Africa has had the opportunity to interact with. (Applause.)

Yes, we know he's going through some terrible angst, but perhaps it's to be expected of the leader of the most powerful nation in the world at this time of events for the globe. The world is in flux now. It's yet to stabilize, given the rapid changes happening all around us. And we are all engulfed in the spread of power -- the division of power among the continents. All the nations are moving forward and asserting themselves to share in power.

If humanity would hold its place, it seems all of us might begin to share together -- to move together into the global village. And the movement should be on the backs of science and technology, in which the United States is still the leader.

We look up to the leadership of the United States to perhaps develop a new vision -- new vision for the global village, so it might help humanity as a whole to move into the village, to live by values that will be shared not on basis of might, but on basis of just helping humanity, letting everybody feel they are part of the show.

When you are a leader in such a situation, such a flux, naturally you suffer many knocks all over the place. And the perhaps highest quality expected of the leader is to stay the rough and tumble of the changes that must be faced. And I believe this leader is doing very well, in spite of the many challenges that engulf him now.

So I would resume my seat, wishing successful ending of his tenure of the United States President, and then also a very resourceful retirement. He's offered that -- to develop an institute in his tribal home of Texas, and that when I retire I would be welcome in that realm. I look forward to that. It would make two of us because we assumed office the same year, 2001, and we are retiring together again, same year, by end of this year. So perhaps we are two of a kind. (Laughter.)

I wish him very well and great success. Thank you very much. (Applause.)

Ladies and gentlemen, may I request that we all drink a toast to this great man.