For Immediate Release
Office of the Press Secretary
September 14, 2008

THE PRESIDENT: Well, thanks to you members of the administration for coming in this Sunday morning to discuss Hurricane Ike. I was on the phone to -- with Secretary Chertoff before coming into this meeting. The Secretary went down yesterday; he gave me a briefing from Austin. He'll be heading into Houston. This is all part of our efforts to help Texas and Louisiana with a focused, effective recovery effort. 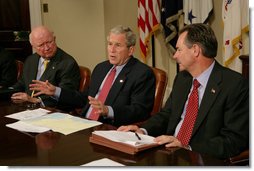 Administrator Paulison briefed us on how we're doing on our priorities. First priority is search and rescue. And I want to thank the people at the federal and state levels for working so hard to rescue our fellow citizens from harm's way. Rescue efforts continue on as we speak.

I do urge people in the affected areas to listen closely to local authorities before they attempt to get back home. There are people now surveying damage and people reporting in to the state as to the conditions there in the different communities. And it's very important for citizens, who I know are anxious to get home, to take your time and listen, and take the advice of the local folks.

Our priorities, along with the state and local folks, is to make sure electricity gets up as quickly as possible. Secretary Bodman gave us a briefing on the outages. Interestingly enough, some electricity is already being restored to Houston, I'm told. And I do want to thank the utility companies for working hard to get electricity up. And to the extent that you need help stringing lines, I'm confident other utility companies from around the country will help provide manpower.

Secretary Chertoff and David Paulison tell me that the federal government will be providing 1.5 million liters of water a day and 1 million meals a day to help the people who have been displaced. That'll of course be coordinated with Governor Perry's office and the state of Texas, as well as the Mayor's.

One of the things that's very important for the city of Houston and the other cities is to get the water up and running, the sewage plants running. And that'll be a priority of ours to help them. And finally, debris removal. It's very important that our Corps of Engineer, working with local officials, implements a coordinated debris removal plan.

And so that's what we discussed this morning. This is a tough storm, and it's one that is going to be -- it's going to require time for people to recover.

As well, the Secretary of Energy briefed us on, you know, preliminary reports on gasoline production, pipeline distribution, and it's a little early to fully assess where we stand, although I can say that, you know, one of the plant -- one of the pipelines coming out of the Gulf Coast area is running -- the Plantation pipeline, and we are watching very carefully as to when the Colonial pipeline can get up and running. 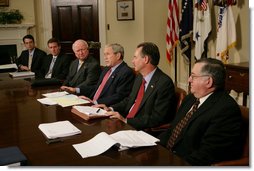 And in the meantime, as I mentioned yesterday, in coordination with the Department of Energy, we suspended -- and the EPA -- we suspended reformulated gasoline rules so to make it easier to import gasoline from abroad so as to take pressure off of our consumers.

And I repeat what I said yesterday: that the federal government, along with state governments, will be monitoring very carefully as to whether or not consumers are being mistreated at the pump -- in other words, gouged. It's very important for our fellow citizens during the period of temporary disruption to be treated fairly.

And so I'm considering -- have considered my plans over the weekend and I will be going down to Texas on Tuesday to express the federal government's support -- sympathy on the one hand and support on the other to -- for this recovery effort and rebuilding effort.