For Immediate Release
Office of the Press Secretary
September 13, 2008

THE PRESIDENT: Good morning. I just finished a video conference with Secretary Chertoff, Director Paulison, and other people about Hurricane Ike.

Obviously, this is a huge storm that is causing a lot of damage not only in Texas, but also in parts of Louisiana. The storm has yet to pass, and I know there are people concerned about their lives. Some people didn't evacuate when asked, and I've been briefed on the rescue teams there in the area. They're prepared to move as soon as weather conditions permit. Obviously, people on the ground there are sensitive to helping people, and are fully prepared to do so. 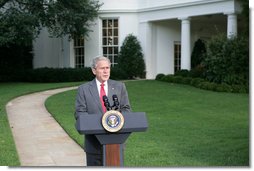 Secondly, I've asked Secretary Chertoff to go down as soon as weather conditions permit. I suspect he'll be able to get down to Texas this afternoon and will be in the Gulf Coast region hopefully within a reasonable period of time to help the state of Texas -- officials, as well as local officials, begin the recovery effort. There's going to be a need for federal, state, and local coordination as this storm moves through East Texas.

This administration has moved quickly. Last night we suspended EPA waivers* on certain reformulated gasolines, which will make it easier for imports from abroad to make it into our markets. In the meantime, the Department of Energy, the Federal Trade Commission, and I know state authorities will be monitoring gasoline prices to make sure consumers are not being gouged, make sure consumers are being treated fairly.

As this massive storm moves through the Gulf Coast, people of that area can be rest assured that the American people will be praying for them and will be ready to help once the storm moves on. 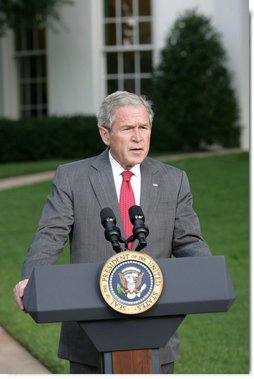