For Immediate Release
Office of the Press Secretary
September 12, 2008

THE PRESIDENT: I'm privileged to be the President of a country that produces citizens such as these. The United States is a country of volunteers -- three such volunteers are with us, Oklahoma citizens who serve in a variety of ways.

Karen has produced a tie -- a way to keep our -- help our children stay cool in Iraq. She is supportive of our troops. She and her organization have done fine work. 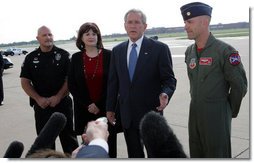 The Major here, a golf pro, who is going to go on his third tour in Iraq, has used his position in the golfing industry to raise money to help Gold Star families. How cool is that? This guy is going to Iraq on Monday, and yes, he served that way, but he also serves in a very compassionate way.

Captain Castleberry and some of his folks he works with out at the Sheriff's Department pulled up stakes and headed down to Morgan City, Louisiana in the wake of Gustav. Nobody made him do it; he just decided to do it on his own.

Our country is better off because millions of citizens such as these three folks have heard the call to serve something greater than themselves. And I urge our fellow citizens all around the nation to find ways to serve. It turns out that when you help somebody in need you help yourself even more.

I am deeply concerned about Hurricane Ike. It is a major storm headed toward a large population soon. I was on the phone this morning with Secretary Chertoff and Director Paulison of FEMA. I spoke to my friend, Governor Perry, yesterday. The state of Texas is preparing for this emergency. I suspect there's going to be some Texans headed for Oklahoma. And I know that they're going to find good people up here who want to help them.

So I want to thank the citizens of Oklahoma for getting ready to help a Texan in need. I urge my fellow Texans to listen carefully to what the authorities are saying in Galveston County or parts of Harris County, up and down the coast. We'll be monitoring the situation very carefully. The federal government will not only help with the pre-storm strategy, but once this storm passes we'll be working with state and local authorities to help people recover as quickly as possible.

Thank you all for what you're doing; God bless your work. Good luck to you.