For Immediate Release
Office of the First Lady
September 12, 2008

MRS. BUSH: Thank you very much. Thanks so much. I want to thank Mayor Bloomberg for telling us what's happening here in New York City and thank him for his excellent leadership. Thanks to the co-chairs of the ServiceNation Summit for bringing us together for this very important event.

Yesterday, Americans marked the seventh year since the September 11th attacks. This solemn anniversary brought back many memories for all of us, but one particularly stands out in my mind. It was the first Sunday after the attacks, and the reading in church was from Psalm 27: "I believe I shall see the goodness of the Lord in the land of the living!" And I believe that's what we saw in the weeks and the months that followed this stunning tragedy -- from the thousands who lined up to donate blood, to the school children who raised $12 million for the boys and girls of Afghanistan. We see this same goodness here in the people who have gathered to serve others. 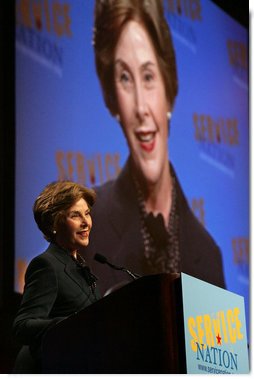 In his 2002 State of the Union address, President Bush challenged our country to sustain this spirit of service that followed September 11th. He asked every American to dedicate two years -- or 4,000 hours -- over the rest of their lifetimes to help their neighbors in need. As the leader of Helping America's Youth, I've seen Americans answer this call across our country. I've met violence interrupters at CeaseFire Chicago, lawyers-turned-coaches at Think Detroit, and countless others who are just a few of America's 61 million volunteers.

Americans can do more. Over the past seven years, we've laid a strong foundation to increase these efforts. USA Freedom Corps was established to oversee federal volunteer initiatives and to help link Americans to new chances for service. Its website, volunteer.gov, provides a database of 4 million service opportunities -- from repairing houses to staffing crisis hotlines.

Under the umbrella of USA Freedom Corps, the President's Council on Service and Civic Participation brings together leaders from business and non-profits and other sectors to promote volunteer service. Some of the members of the President's Council on Service and Civic Participation are here with us today. In February, the President's Council launched a new campaign with an ambitious goal, and that is generating $1 billion of pro bono service from skilled professionals. Corporate partners in this "Pro Bono Challenge" encourage their employees to donate time and skill to build the capacity of non-profits. On Monday, President Bush announced that IBM has joined this challenge -- committing their staff to $250 million worth of service. (Applause.)

Americans today have more opportunities to volunteer through government-supported national service programs. AmeriCorps has expanded, and it now has more than 74,000 members. The Peace Corps has opened or re-opened programs in 13 additional countries, bringing the total number of countries serve to 74, and the number of Peace Corps volunteers at a 37-year high. (Applause.)

After September 11th, two national service programs were founded to respond to the needs of our times. This year, Volunteers for Prosperity mobilized more than 43,000 doctors, teachers, engineers, and other skilled Americans to share their expertise in the developing world. Here at home, Citizen Corps is marshaling nearly a million volunteers for disaster preparedness and response.

Most Americans find their volunteer opportunities through their faith congregations. When the President took office, institutional barriers often discouraged government from partnering with faith-based organization. The President's Faith-Based and Community Initiative has worked with USA Freedom Corps to reduce these barriers in national service programs -- and their efforts are making a difference in Americans' lives.

Since then, AmeriCorps members and the volunteers they support have joined this faith-based organization to rebuild over 1,600 homes. (Applause.) Reverend Brown says, "Getting the grant to bring aboard these hard workers ... was a blessing for my community. We are victims of this storm, but with faith in humanity and faith in God we are also victors."

As we look to the future of the service nation, we can look to the optimism and the faith of people like Reverend Kevin Brown. And we can look toward two emerging trends -- a greater commitment to service among older Americans and increasing rates of volunteering among young Americans.

Baby boomers are expected to double the number of older American volunteers. National service programs like Senior Corps are assisting this generation's search for opportunities to volunteer after they retire.

Della Stolsworth works with Senior Corps' Retired and Senior Volunteer Program. At Montgomery County's Volunteer Center in Maryland, she pioneered an effort that connects retired professionals to local non-profits. Non-profit service organizations in her community are saving thousands of dollars in consulting fees. And the volunteers Della assists are using the skills they learned over a lifetime career. As Della explains it, some retirees don't just want to play golf.

The non-profit Experience Corps is taking advantage of the so-called "Experience Boom" by engaging older adults as tutors and mentors. This year, 20,000 students across our country will improve their reading and academic skills with the help from an Experienced Corps tutor.

Even America's youngest students are taking time to serve. In March, I visited Rolling Ridge Elementary School in Olathe, Kansas. At the beginning of each school year, Rolling Ridge students receive service logs to track their volunteer hours. They earn certificates for every ten hours of unpaid service. The girls and boys I met had performed activities like collecting food for their local food bank and assisting with adult English classes. One 12-year-old had logged more than 500 hours of service since he was in the 2nd grade.

The national program Learn and Serve America is encouraging more schools to make service activities a part of the curricula. Last year, its grantees engaged over 1,400,000 students -- from kindergarten through college -- in service-learning activities. Private-sector organizations have joined in this effort. Alma Powell, who is here with us today and is also a Summit co-chair, heads America's Promise. As one of America's Promise Alliance's partnership's five promises for every child is the opportunity to serve.

Children who learned the importance of service early are much more likely to grow up to be service-minded adults -- people like Peace Corps volunteer Natasha McLintock. At the age of 28, Natasha spent two years assisting village leaders in Thailand. She then volunteered for a second, six-month tour in Jamaica. There, she helped community leaders maintain a new water system. Some would call months without running water an unwarranted sacrifice. Natasha just calls it a "life-changing experience."

As President Bush said this morning, the true source of America's strength is in the compassion of its people -- people like Natasha and people like each of you who are here today. As ServiceNation looks toward the future of volunteering, we can be confident in this compassion. And together, we can build an America with 100 million volunteers.

Thank you all, and may God bless you. Thank you, everyone. Thanks so much. (Applause.)