For Immediate Release
Office of the Press Secretary
September 10, 2008

PRESIDENT BUSH: Mr. President, welcome. First of all, I am so pleased to see that you're looking good. The President's health is strong, and that's going to be very important for the people of Iraq. After all, there's been no stronger defender of a free Iraq than President Talabani. I've known him for a long time. He cares deeply about the Iraqi people, and he has been a strong defender of human liberty. 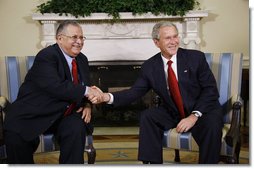 Mr. President, thanks for the good conversation we had about the election laws, about the need to get a strategic framework agreement signed. And thank you very much for bringing me up to date on your perspective about life inside of Iraq. It's -- things have changed a lot since we've known each other.

PRESIDENT BUSH: And attitudes are completely different now that people realize the security situation has changed and mothers can raise their children in a more normal life. It's still difficult, but there's no doubt that the surge has been effective, which has enabled us to take out troops. Iraqis want there to be fewer U.S. troops, the United States wants there to be fewer U.S. troops, but both of us want to realize that vision based upon success.

And so, Mr. President, welcome back. I'm glad you're feeling good. And thank you for the visit.

PRESIDENT TALABANI: Well, Mr. President, thank you very much for giving me the honor of meeting you again. I think it's clear that we are in Iraq looking to you as a hero of liberation of Iraq from worst kind of dictatorship. And now we are working with your -- with you, Mr. President, for finalizing the strategic framework agreement between United States and Iraq.

And also, we are always getting benefit from your views about how to secure Iraq. I think you know very well that you and we in Iraq achieved very good successes on terrorism. Now I can say all parts of Iraq liberated from terrorist control and activities. It's true that some groups remain hiding themselves from here or there, but there's no place, no inch of Iraqi land under the control of terrorist activities. There are some terrorist -- still groups working -- hiding themself, and thanks to you and sacrifice of your brave army and to Iraqi people, now we can live in peace and security.

And Iraq government started to spend the money which we have for serving the Iraqi people and rebuilding the country, reconstructing the country. Not only we liberated our country from terrorist activities, but also from militias, outlawed militias who are also making troubles and danger for Iraqi people.

And as you have heard, the Basra city, Sadr City, (inaudible), Ninawa, Baqubah -- all these cities are now liberated. So we are thankful to you and to your people, your army. We hope that the agreement about this strategy formation will be signed soon.

And as usual, we are working, our parliament is working now for finalizing the draft of a new law for election provinces, and I hope that, as I heard the news yesterday, I hope that today it will be finalized, because the groups -- head of groups of parliament are now gathering in parliament to reach -- to finalize this.

In our country, we are now busy to reconstruct our country and to rebuild our country. And I am glad to tell you, Mr. President, that our position with our neighbors is improved very well -- with Turkey, with Syria, with Iran, with the Arab countries. The relation is notable now and we have no problem with any of these countries. In contrary, many, many new ambassadors are coming --

PRESIDENT TALABANI: -- to our country from Arab countries. And our visit of Prime Minister of Turkey, Mr. Tayyip Recep Erdogan, and of the -- His Majesty, the King of Jordan, to Baghdad were very successful, and was encouraging to Iraqi people to understand that they have friends outside Iraq.

So I hope that friendship and relation between your great people and the Iraqi people will continue and will be strengthened. And we will never forget what you have done for our people.