For Immediate Release
Office of the Vice President
September 5, 2008

PRESIDENT YUSHCHENKO: (As Translated) Your Excellency, Mr. Vice President, and your colleagues, this is a great honor for me on behalf of Ukraine to welcome the U.S. Vice President Richard Cheney for the visit to Ukraine. When briefly speaking of the negotiations that we've just had, they were in three main dimensions.

The first part is about the Russian-Georgian conflict, the situation in the whole region -- and that was actually the reason for this visit of Mr. Vice President. The second part was about our bilateral relations, that whole package starting with trade cooperation and economic investment cooperation, including the whole range of applicable projects in differing sectors of our economies. The third part is the internal situation in Ukraine. It was interesting -- the Vice President was interested in my opinion and my vision of the situation, as well as the settlement of this conflict. So in this very context, I would like to express some of the opinions. 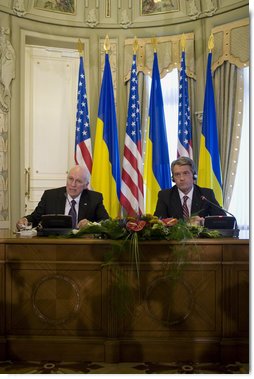 As I already mentioned, the key part of our negotiations was about the Georgian conflict and ways to settle this threat, how to optimize the situation, and security in the Black Sea area. We confirmed our full devotion to the fundamental principles of Helsinki Act, which is the foundation of international relations concerning territorial integrity and sovereignty, indivisibility of national borders. We believe that, for us, for a sovereign state, there is a whole range of conclusions that are within the framework of Russian-Georgian conflict -- trigger our concerns. The conflict of the 8th of August showed that there are security risks in the Black Sea area, and we need to do everything possible to make sufficient steps that would not allow expanding of that threat to other regions and to other frozen conflicts. Recent Georgia's development make us apply more serious approaches, and we're not to allow those expansions in the future.

Thirdly, Ukraine truly values the territorial integrity of Georgia and its borders, and this is -- and this will not change. Of course, we have concerns about the possibility of Black Sea navy forces that may get involved in the conflict with other countries, because this kind of mechanism actually involves Ukraine into such military conflicts. This does not correspond to our national interest. This is a very important issue for the Ukrainian public and politicians.

Undoubtedly, the decision on independence of South Ossetia and Abkhazia are not preferable for Ukraine and are no good, and we're all for the settlement plan that was recently adopted. We also would like to underline that recent Georgian developments have demonstrated that one and -- none alternative model of reliable protection of territorial integrity of any country, whether it is Ukraine or any other European country, is adherent to the whole European North Atlantic collective security assistance. In this context, we believe that our work on Ukraine joining the Membership Action Plan is really urgent and important in this stage. This fully corresponds to the risks, and will be adequate to the threats that exist today in our region, and this kind of policy fully corresponds to the national interests and national legislation of Ukraine. I'm quite sure that this policy corresponds to the interest of the North Atlantic Treaty.

Enlargement to the east -- enlargement of the stability in this area towards the east, including Ukraine, will leave an ensured factor of stability and security in this region. I'm sure that this is a road with two directions -- this is beneficial for Ukraine and for our partners in the North Atlantic Alliance.

We also spoke about our European integration aspirations. First, this is the foundation of our strategy, especially in light of the 12th EU-Ukraine summit that will take place on the 9th of September this year in France. We hope to receive positive signals within the framework of this meeting.

As for our bilateral relations, I'd like to say that we highly appreciate and welcome this year's visit of the U.S. President George Bush to Ukraine. It gave new impetus to our relations, and we reached agreements on several organizational steps that will also help expanding and developing our bilateral sector of relations. This also includes the Coordination Group meeting on the 11th of September this year. It also -- we can also say that we are satisfied with the evaluation of the current economic and trade relations with the United States. The trade turnover last year was $3.3 billion. Just in the first six months this year we have almost doubled the figure, and apparently we can expect the trade turnover of about $5 billion. This is a very good evolution, and there are many foundations to accelerate our bilateral relations and make them enhanced. Further enhancement of our bilateral economic relations will help and promote the U.S.-Ukrainian Council on Trade and Investment meeting that will take place very soon. It will be a very good conversation, I think; very good discussion with high representation.

A separate part of our conversation was about energy sector and cooperation in nuclear power. You know that recently the whole range of productive decisions were made regarding adaption and classification of nuclear fuel, with the use of it -- I mean, the nuclear fuel production that is utilized in our units and contracts.

On security issues -- energy security issues, we give high assessment to those projects that are implemented within the framework of the bilateral program on the enhanced security of nuclear power units. There are numerous projects there that are successful in developing. And taking advantage of this opportunity, I would like to thank the American side for this kind of applicable projects.

I also would like to address to the United States of America with the request to support the recognition of the Great Famine of 1932-1933 in Ukraine as a act of genocide, in the course of the U.N. General Assembly meeting, and I would like to thank Mr. Vice President for his interest in the domestic situation in Ukraine and the ways of settling the conflict. Thank you for your attention.

VICE PRESIDENT CHENEY: Thank you, Mr. President, and good afternoon to you all. It's a tremendous pleasure to be in Kyiv, and to see my good friend President Yushchenko. We've met many times before -- in America, in Poland, and in Lithuania. I'm delighted to be with you, sir, in the great capital city of your country. I appreciate your kind words and hospitality. And to all Ukrainians, I bring warm greetings from President George W. Bush and the people of these United States.

Mr. President, I arrived here last night from Georgia, a young democracy that in the last month has been subjected to a Russian invasion, and to an illegitimate, unilateral attempt by force of arms to dismember its territory. The people of Georgia are looking to both our countries, and to the rest of the free world, to support them in this time of great trial and testing, and we must answer the call. Ukraine's support for Georgia -- and, in particular, your dramatic trip to Tbilisi in the first days of the crisis -- have provided a courageous example for others. The free world must follow that example with firmness, with patience, and resolve.

Russia's actions have cast grave doubts on Russia's intentions and its reliability as an international partner -- not just in Georgia, but throughout the region. Against that background, President Bush has asked me to give a clear message to the people of Ukraine: The United States has a deep and abiding interest in your well being and security. For almost two decades, we have stood by you to help you secure your independence, sovereignty and integration into the international community. Today, we proclaim our unwavering determination to strengthen the bonds between our countries -- not just now, but for the long term.

Mr. President, we have seen the deep courage of Ukrainians in everything they have struggled to accomplish in recent years to consolidate the gains of democracy. The work has not been easy. On this journey I am proud to reaffirm America's deep commitment to this remarkable, rising democratic nation that has won the respect of the entire free world.

My country's position is clear: The United States fully supports the right of Ukraine to build ever-stronger ties of cooperation and security throughout Europe, and across the Atlantic. We believe that a closer strategic relationship is in the interest of all. As free countries, we believe in representative government, open trade, and common security. We believe in the right of men and women to live without threat of tyranny, economic blackmail, or military invasion or intimidation. Ukraine's best hope to overcome these threats is to be united -- united domestically first and foremost, and united with other democracies. We believe that cooperation among democratic nations will lift the prospects of long-term prosperity, and the peace we all desire.

Ukraine's support for freedom is clear. As President Bush noted here in Kyiv five months ago, Ukraine is the only non-NATO country supporting every NATO mission, from Afghanistan to Kosovo. Ukrainians have a right to choose whether they wish to join NATO. And NATO has a right to invite Ukraine to join the Alliance when we believe -- that we believe that you are ready and that the time is right. No outside country gets a veto. The allies agreed in Bucharest that Ukraine will eventually be a NATO member. And that commitment stands today.

Finally, I'd like to mention that I have visited Kyiv on one previous occasion -- more than 20 years ago, as part of a congressional delegation. At the time, of course, Ukraine was a captive nation, claimed by an empire as a mere province. To be in this country once again -- to stand on free soil, among free people, and to see the progress that you've made despite all difficulties -- is a privilege and a joy. Having seized their independence, the people of Ukraine are writing a new and momentous chapter in the history of this land -- one that has important implications, not just for Ukraine, but for the future peace and security of our world. Thank you.