For Immediate Release
Office of the Vice President
September 3, 2008

Remarks by Vice President Cheney and President Aliyev of the Republic of Azerbaijan After Meeting
Summer Presidential Palace
Baku, Azerbaijan

PRESIDENT ALIYEV: Dear Mr. Vice President, I'm very glad to see you again, and welcome to Azerbaijan. We pay very big importance to your visit, and today we've had the good opportunity to exchange views on our bilaterals on our relations, issues, on regional development. And once again, the successful development of our relations continues and empowers many more areas.

Our relations really have a long history, and they started mainly with energy issues, and those were projects which were implemented in our region, initiated by Azerbaijan with the strong support from the United States -- and so are implemented. It's a real success story. And we are working now on the further development of energy partnership and diversification of energy supplies, which is important not only for consumers but also for producers like Azerbaijan's. 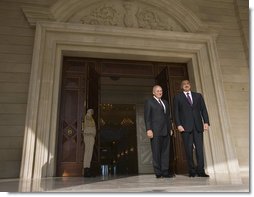 And after that, relations between our countries started to develop also in different areas. Now, they cover a very broad orbit of cooperation: political relations developed successfully, are very strong; economic ties; relations in security issues, in defense issues; relations in peacekeeping operations around the world. Of course, issues of settlement of Armenia and Azerbaijan in the Nagorno-Karabakh conflict are very important for us, and the United States as -- along with the Co-Chairs of the Minsk Group plays a very important role in helping both sides to find a solution to the conflict. But, of course, solution must be based on international laws, as every other conflict, with respect to the territorial integrity of Azerbaijan and to the territorial integrity of all the countries in the region and in the world.

Of course, regional development here was discussed, and Azerbaijan initiated many projects which have a broad regional dimension, and maybe importance even beyond the regional scale. And here also, relations between the United States and Azerbaijan play a very important -- I should say, decisive -- role in implementing of all these projects.

So far we've been very successful, and worked with plans we implemented, and I'm sure that a strong partnership between the United States and Azerbaijan and other countries in the region will lead to more successes in the future, will lead to a strengthening of security measures, peace, stability, and prosperity for all of us.

VICE PRESIDENT CHENEY: Well, thank you very much, Mr. President, and it is a pleasure to see you again. And we remember very fondly your visit to the States two years ago. Of course, we met some years in the past when we were both in the energy business. It's a pleasure to be here and to take up a longstanding invitation to visit. This is a trip that was planned some time ago. I want to thank you for the hospitality you've shown me, and my wife, and our delegation. And I'm honored, as well, to bring good wishes to the people of Azerbaijan from President Bush and the people of the United States. 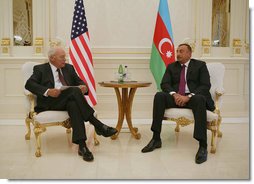 The U.S. and Azerbaijan have many interests in common. We both seek greater stability, security and cooperation in the vital region of the world. We share the goal of energy security for ourselves and for the international community. And we are both devoted to the cause of peace. One of the basic foundations of security and peace is respect for national borders -- a principle that is endangered today. Mr. President, although we decided on this visit months ago, we met this evening in the shadow of the recent Russian invasion of Georgia -- an act that has been clearly condemned by the international community. President Bush has sent me here with a clear and simple message to the people of Azerbaijan and the entire region: The United States has deep and abiding interests in your well being and security. For almost two decades, we have stood by you to help your people build and consolidate their independence, sovereignty and integration as valued, respected members of the international community. Today, we reaffirm that commitment, and our determination to strengthen relations between our countries -- not just today, but for the long term.

America strongly supports the sovereignty and territorial integrity of Azerbaijan. We are committed to achieving a negotiated solution to the Nagorno-Karabakh conflict -- a solution that starts with the principle of territorial integrity, and takes into account other international principles. Achieving a solution is more important now than ever before; that outcome will enhance peace and stability in the region, and Azerbaijan's security, as well.

America also appreciates Azerbaijan's commitment to working with Western countries on energy issues. All peoples are best served when market principles are allowed to work; when there is transparency of information; when energy export routes are diverse and reliable. The United States strongly believes that, together with the nations of Europe, including Turkey, we must work with Azerbaijan and other countries in the Caucasus and Central Asia on additional routes for energy exports that ensure the free flow of resources. Energy security is essential to us all, and the matter is becoming increasingly urgent. 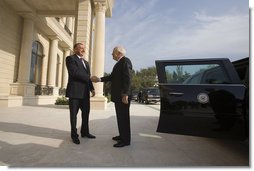 Finally, Mr. President, I want to express my country's appreciation for the brave contributions that Azerbaijan is making to the fight against the global terrorism problem. Our forces have worked together in Afghanistan and Iraq. We cooperated to foil plots by violent extremists. Our countries are united in recognizing the threat posed to Azerbaijan and the world by the proliferation of nuclear weapons to dangerous regimes. America deeply appreciates Azerbaijan's contributions to the cause of peace and security, both in this volatile region and internationally. And we support the people of Azerbaijan in their efforts, often in the face of great challenges, to strengthen democracy, the rule of law, and respect for human rights, and to build a prosperous, modern, independent country that can serve as a pillar of moderation and stability in this critical part of the world. Thank you very much. 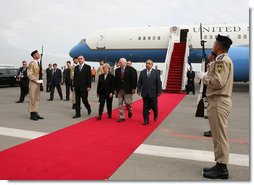