For Immediate Release
Office of the First Lady
September 2, 2008 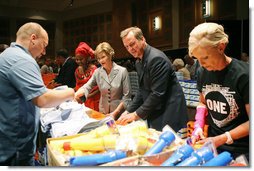 It's been my privilege to be able to represent every one of you. And we couldn't -- the United States government's help that comes through these three programs that are supported so strongly by member -- both sides of the aisle, members of Congress that make these programs possible, but they couldn't be the deliverer of help if they didn't partner with groups like World Vision. World Vision, a number of other faith-based and community-based groups are our partners that make sure this healing help gets to people in every one of the countries that PEPFAR directs their monies to, or PMI, the President's Malaria Initiative directs attention to. These are the countries that are hardest hit by malaria, by HIV/AIDS. And just as Senator Frist said, we have really good results with a number of people who are now on antiretrovirals. 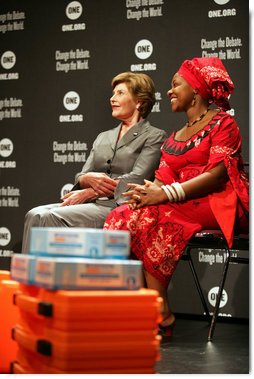 It's been such a privilege for me to be able to see that, to see how you have helped, how all of the people of the United States, through your generosity, have literally brought people back to life.

So this gives me the chance to thank each and every one of you. I have no worries I can tell the ONE Campaign. I know that whoever is elected will continue this, because it is so effective, and because people depend on us, and because, just like Princess said and President Bush said, to whom much is given much is required. And certainly we are so blessed in the United States.

So thank you all. I want to make a special shout out to Mike Gerson, if he's here, for his great and creative work in developing PEPFAR and PMI. And thank you all very much. Thank you, Senator Frist. Thank you, David. Appreciate it. (Applause.)