For Immediate Release
Office of the Press Secretary
September 2, 2008

THE PRESIDENT: Members of my Cabinet have assembled here, and I thank you all for coming. We recognize that the pre-storm efforts were important and so are the follow-up efforts -- in other words, what happens after the storm passes is as important as what happens prior to the storm arriving.

And so our discussion today is about energy. The Gulf Coast region produces a lot of energy for the United States. And we're now in the process of assessing any damage done to the infrastructure and what -- it's a little early right now to come up with a solid assessment. There are some encouraging signs. For example, during Katrina, rigs would be -- rigs moved because of the force of the storm and their anchors drug across pipelines, which caused there to be infrastructure damage. We didn't see much of that this time, although I will tell you that it's a little early to be making any forecasts. 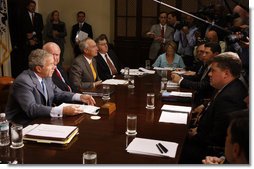 It's not too early, however, for the federal government to continue to coordinate with state and local people. That's why Secretary Bodman was in touch with Governor Jindal. We want to make sure that we're in touch with these energy-producing states, to help assess what took place and what needs to happen.

One thing is for certain: When Congress comes back, they've got to understand that we need more domestic energy, not less; that -- and one place to find it is offshore America, lands that have been taken off the books, so to speak, by congressional law. And now they need to give us a chance to find more oil and gas here at home. I'd much rather American consumers be buying gasoline produced from American oil than from foreign oil. I'd rather our dollar stay at home than go overseas.

And I know the Congress has been on recess for a while, but this issue hasn't gone away. And this storm should not cause the members of Congress to say, well, we don't need to address our energy independence; it ought to cause the Congress to step up their need to address our dependence on foreign oil. And one place to do so is to give us a chance to explore in environmentally friendly ways on the Outer Continental Shelf.