For Immediate Release
Office of the First Lady
September 1, 2008

MRS. BUSH: We're here in this center because both Target -- which is, as you all know, is headquartered here in Minneapolis/St. Paul -- and FedEx, and the Red Cross are going to be three partners in this service center that's being set up around -- this is the space, you see all the people here from Target in their red shirts. They're -- Target is going to supply what's needed for a hygiene pack for people who are in shelters all over the United States, who've evacuated from the Gulf Coast. And then FedEx will fly the packs down to the Gulf Coast or wherever they're needed, and the Red Cross will distribute those to the Red Cross shelters everywhere there. These will be packs that have toothpaste and toothbrush and just the things that people will need who've left their home quickly, and just, hopefully, we're all hoping we'll just need for a very short time just to tide them over until they're able to get back to their homes. 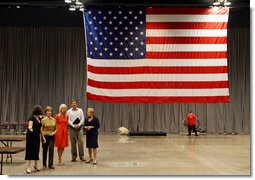 I want to thank Target for everything you all do everywhere. Target is always such a really great sponsor of so many great things. I want to thank the Red Cross here. I met the Red Cross people when I was here; I happened to be here right after the bridge fell in Minneapolis. And so I saw them there and the great work they were doing for everyone after the fall of the bridge.

And then I want to thank FedEx as well for being a part of this, a partner in this.

These were all sort of ideas that came from Cindy and John McCain -- ways that, while we're here in Minneapolis/St. Paul, we can do things for people on the Gulf Coast. I think Cindy can go ahead and say some of the things that John told her and that he was hoping we would be able to put together here.

MRS. McCAIN: Well, obviously you heard my husband's message yesterday, and throughout this convention we are not Republicans, we are Americans. And this is a perfect example. Within minutes of when my husband put the call out, Target, FedEx, Red Cross -- everyone who's been involved in this convention and more came forward immediately and have offered assistance in such a major way. We cannot thank you enough.

So I am very proud to be here, and thank you so much for what you are doing -- to FedEx; certainly the Red Cross, who I've worked with you around the world, and the things that you do continually break my heart through the world. And Target, thank you once again for everything you've done, and your people and your volunteers and for putting this together for us, but most importantly putting it together for the Gulf Coast. Thank you.

MRS. BUSH: Special thanks to the Red Cross, and people anywhere in the United States that hear us here can be sure to get to your local Red Cross as well to make sure they can send supplies on down to the Gulf if they need them there or can help in any other disasters that the Red Cross helps in everywhere all around the world. So thank you very much for that. 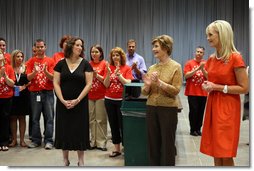 MRS. McCAIN: We're going to be encouraging not only the delegates to the convention but people from around the United States to give of their time, to give of their expertise and to give from their wallets as well. And my husband and I are glad to be the first ones to step forward in this effort and to be able to give to each of the charities from each of the states that were noted on the back of the card that you've seen us give out. It's our pleasure to be the first ones involved in that and to be -- encourage everybody else to match what we do.

So thank you. And thanks for coming and thank you for taking a look at what they're doing. And I encourage you all to come back when they're busy working and busy getting things done, because we need that -- the continuing message of hope and security for the folks in the Gulf Coast. (Applause.)

Q Mrs. Bush, I know you've been down to the Gulf probably 20, 22 times -- I've lost track. But are you and your husband going to be going down anytime the next couple of days to take a look?

MRS. BUSH: I don't know about in the next couple of days. I mean, we'll go as soon as we can go and don't take assets -- the assets that they use when the President is there away from what people need there. But I hope to go again soon.

Q Have you talked to the President this morning about the --

MRS. BUSH: I haven't talked to him this morning since he's been to Austin and San Antonio.

Q What will be the focus of your speech tonight?

MRS. BUSH: Well, tonight, Cindy and I will be talking about these very same issues. This is -- as you know, the program that was scheduled for tonight at the Republican Convention has been canceled. And that speech was going to be about Cindy McCain and about Senator John McCain and about President Bush. And I might have a chance to still give it. We'll see if that -- I gave it to Cindy already so she could hear what I was going to say about her. (Laughter.)

But tonight, we'll -- late this afternoon we'll be talking about this same thing, the ways people in the United States can help and what the delegates at the convention can do as well.