For Immediate Release
Office of the Press Secretary
September 1, 2008

The coordination on this storm is a lot better than on -- than during Katrina. A lot of it had to do with the governors. Yesterday I was on the video conference with the Governors of Alabama, Louisiana, Mississippi, and Texas. There was clearly a spirit of sharing assets, of listening to somebody's problems and saying, how can we best address them? The federal government is very much involved in helping the states. Our job is to assist. That's why Secretary Paulison is with me today -- he heads FEMA. 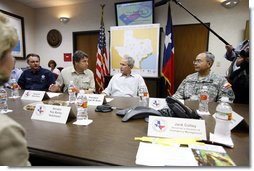 I do want to thank the state of Texas and other states for welcoming citizens from Louisiana. It's been a huge evacuation. It's hard for a citizen to pull up stakes and move out of their home and face the uncertainty that comes when you're not at home. And I want to thank those citizens who listened carefully to the local authorities and evacuated. And I want to thank my fellow citizens in Texas and in other states for welcoming these folks in open arms. The state of Texas is a generous state. And, Governor, I wanted to thank you and your team for being so kind to the people.

And it's very important for those who have been evacuated to listen very carefully to the officials in their respective states before they decide to return. This storm is yet to pass. It's -- it's a serious event. And as the Governor mentioned, the people of East Texas got to be prepared for a possible flooding event.

And if you're interested in how you can help once the storm passes, please call up the different websites of these organizations, and donate your time or your money so that the recovery effort is as compassionate and complete as possible.

Governor, thanks for having me. I want to thank your team for all the hard work they're doing. I'm looking forward to going with you to the room next door to say thanks to the people that are working the long hours. And we're going to go down to San Antonio to see a staging area there and thank the people there for working so hard, not only on behalf of the citizens of Texas, but on behalf of the people of the region.

Appreciate it. It's good to be home. 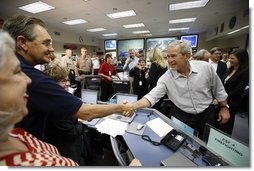 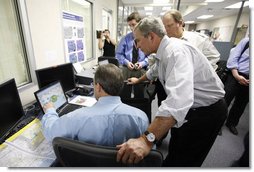