For Immediate Release
Office of the Press Secretary
August 31, 2008

THE PRESIDENT: I'm here at the FEMA Headquarters where I just received a briefing, and I've also come to thank the people behind me for working the long hours that they're doing to make sure that we've got the preparations in place for Hurricane Gustav. There's been a lot of work done to get ready for the storm. Across the Gulf Coast there's governors and state officials and local leaders that are taking this storm very seriously and are preparing proactively. 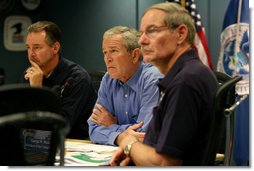 Secretary Chertoff and FEMA Administrator Paulison report that the federal government has prepositioned teams of emergency managers, doctors, ambulances, search and rescue teams, aircraft and commodities throughout the region. There are millions of meals and millions of liters of water prestaged, as well as a lot of blankets and cots. In other words, there's a lot of preparations that have gone in in anticipation of this storm.

We're working with governors to identify and secure out-of-state shelter for people in the path of the storm. Several states, including Missouri, Texas, and New Mexico, are preparing to and have accepted a lot of evacuees. People are leaving those areas that are of concern and we're working hard to make sure that they have a place to go.

The Army Corps of Engineers informs me that while the levees are stronger than they've ever been, people across the Gulf Coast, especially in New Orleans, need to understand that in a storm of this size there is serious risk of significant flooding.

The message to the people of the Gulf Coast is, this storm is dangerous. There's a real possibility of flooding, storm surge, and high winds. Therefore, it is very important for you to follow the instructions and direction of state and local officials. Do not put yourself in harm's way, or make rescue workers take unnecessary risks. And know that the American people stand with you. We'll face this emergency together.

In the coming days I encourage people across our nation to help their neighbors in need. You can contribute to charities, such as the Red Cross. You can volunteer your time to help those in need. And, of course, you can pray for those who might be suffering.

In light of these events, I will not be going to Minnesota for the Republican National Convention. I'm going to travel down to Texas tomorrow to visit with the Emergency Operations Center in Austin, where coordination among federal, state, and local government officials is occurring. I intend to go down to San Antonio where state and local officials are prepositioning relief materials for Texas and Louisiana, and I'll have a chance to visit with residents of both states who have been evacuated.

I will not be traveling to Louisiana tomorrow because I do not want my visit to impede in any way the response of our emergency personnel. I've been talking to the governors, yesterday and today; I also spoke with Mayor Nagin of New Orleans to make sure that they're getting everything they need from the federal government to prepare for what all anticipate will be a difficult situation. I hope to be able to go to Louisiana as soon as conditions permit. 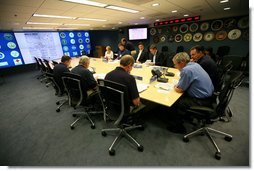 This nation has come to know the strong and resilient spirit of the people of the Gulf Coast. They've made it through great challenges in the past and they're going to make it through this one, as well. In the meantime, all those preparing for this storm are in our thoughts and our prayers from me and Laura and our whole nation. 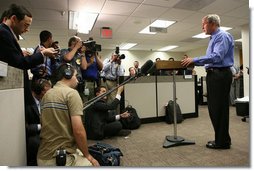