PRESIDENT BUSH: It is such an honor to welcome a man I've come to admire a lot to the Oval Office, President Kikwete of Tanzania. He comes representing a great country. He also comes representing the African Union. And therefore, we've had a wide-ranging discussion about our bilateral relations, as well as the President has kindly given me a briefing on how he sees the different situations and opportunities on the continent of Africa. 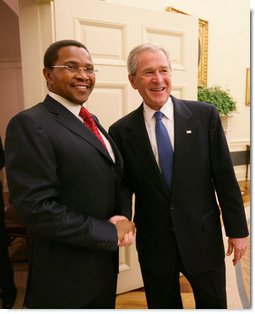 Laura and I will never forget our trip to your country. First of all, it's a beautiful country. The people were so gracious and so friendly. And I came back to America telling our fellow citizens how proud they would have been to have seen the outpouring of affection for the American people, as a result of the American people's generosity in such matters as education, or HIV/AIDS, or the President's Malaria Initiative.

I am confident in saying to the American people that your money is being spent wisely and compassionately in Tanzania. And a lot of it has to do with the leadership of the President. He stood up and said, we've got a problem and I'm going to take the lead. And his government has been responsive to the needs of the people.

And, Mr. President, I can't thank you enough on behalf of the American people for your compassion and your leadership.

I also am looking forward to continuing our discussions on issues like Zimbabwe or Darfur. These are issues that the President is most familiar with. It's the President -- issues in which he has got good judgment about how to proceed on these matters.

And so, Mr. President, it is with great pleasure that I welcome you here to the Oval Office.

Our goal has been extended; it extends the horizons of the possibilities of economic growth in Africa. PEPFAR is helping us tackle HIV/AIDS scourge. Many lives -- many, many children now who were -- who would have been orphaned are no longer orphaned because of that. PMI has helped us so much in the fight against malaria. Many innocent lives of children -- women and children -- are being saved. And Tanzania is one of those examples of the great successes of PMI.

There are a number of -- of course, our biggest challenge now in Zanzibar is how to sustain that success, because only 20 miles on the mainland, in Dar es Salaam, malaria is still there. So if people go to Zanzibar with malaria, then the problem is -- so our biggest challenge is how to sustain it. And we are working together with the PMI and CDC on how to respond to this kind of situations.

So all that I can say really -- I came here to say thank you so much for the support. But of course, you saw it yourself when you came home, how the people came in huge numbers --

PRESIDENT BUSH: They were.

PRESIDENT KIKWETE: -- huge numbers. I was even amazed when they poured in the streets. There the issue was really to express their appreciation to the people of the United States for, again, the support you have been extending to our country.

Of course, we discussed the issues on the continent. We again, we thank you for your leadership. We'll continue to work together. Zimbabwe is a common problem. Darfur is a common problem. We are the front line; but of course, those of us who are on the front line always look toward -- look to the rear -- (laughter) -- to what you do to support us. And there has been such extraordinary support for us in the continent.

We continue to work together. I thank you, President.