For Immediate Release
Office of the Press Secretary
August 20, 2008

THE PRESIDENT: Governor, thank you for coming.

THE PRESIDENT: I thank the United States Senators -- Senator Wicker, Senator Cochran -- Congressman Taylor, mayors, supervisors, county supervisors, small business owners, high school teacher. Thank you all very much for giving me a chance to come and visit with you. 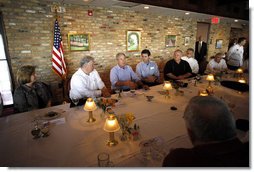 Are there still people wondering about their future? Absolutely. Do they still have other issues to deal with, like cleaning out some of the bureaucracy so that the housing issue can get solved quicker? Absolutely. But things are better here on the Gulf Coast of Mississippi.

And one reason they're better is because you've had strong leadership, and the other reason -- at the state and local level. And the other reason is because people refused to give in to the storm. People picked up their lives and decided that this is where their home was going to be, and made something out of -- made something out of these communities.

I remember going to the schools right after the storm hit, seeing the determination of the teachers and principals about how whether they had to be in a trailer or in a old building, they were going to teach these kids. And the spirit of southern Mississippi is real and it's alive. And the leaders here around the table know better than me what I'm talking about.

So I appreciate you giving me a chance to come. I told people that I'm almost through, but I'm sprinting to the finish. This is the not the farewell dinner. (Laughter.) This is an opportunity to come and listen to -- listen to what's on people's minds, with the idea of continuing to work with the elected officials to solve problems and make sure this is even better six months from now than it is today.

At any rate, I want to thank you -- food's good here, too. (Laughter.) I appreciate your time, Governor. Thank you.