For Immediate Release
Office of the Press Secretary
August 16, 2008

THE PRESIDENT: Good morning. I just had a briefing by my national security team on the latest updates -- on the latest developments in Georgia. And there is some progress to report.

First of all, I want to thank Secretary of State Rice for her trip, and thank you for coming back here to Crawford to give me a firsthand briefing. 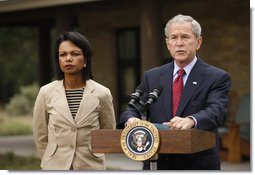 She went to Tbilisi, met with President Saakashvili and his team. And during that time, the President signed the six-point peace plan negotiated by President Sarkozy on behalf of the European Union. President Medvedev of Russia has now signed on to the terms of this agreement. And that's an important development; it's a hopeful step.

Now Russia needs to honor the agreement and withdraw its forces, and of course end military operations.

Secretary Rice will soon travel to Brussels, where she will meet with the foreign ministers of our NATO allies and EU officials to continue to rally the free world in the defense of a free Georgia.

This morning also was briefed by Secretary Gates on the U.S. military's humanitarian mission to help the Georgian people recover from the trauma they have suffered. In recent days, military flights have landed in Georgia to provide relief supplies, and more will be arriving in the days ahead.

A major issue is Russia's contention that the regions of South Ossetia and Abkhazia may not be a part of Georgia's future. But these regions are a part of Georgia, and the international community has repeatedly made clear that they will remain so. Georgia is a member of the United Nations, and South Ossetia and Abkhazia lie within its internationally recognized borders. Georgia's borders should command the same respect as every other nation's.

These resolutions reaffirm Georgia's sovereignty and independence and territorial integrity. Russia itself has endorsed these resolutions. The international community is clear that South Ossetia and Abkhazia are part of Georgia, and the United States fully recognizes this reality.