For Immediate Release
Office of the Press Secretary
August 15, 2008

THE PRESIDENT: Good morning. I've just received an update from my national security team on the situation in Georgia. Secretary of State Condoleezza Rice is in Tbilisi. She's conferring with President Saakashvili and expressing America's wholehearted support for Georgia's democracy.

She will be traveling to Crawford, where I will meet her and she will bring me up to date on what she has seen and what she heard in Georgia, as well as in Paris -- I mean, in France. She did not go to Paris. Secretary of Defense Gates will keep me briefed on the humanitarian assistance to the people of Georgia. We're working closely with our partners in Europe and other members of the G7 to bring a resolution to this crisis. 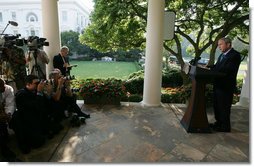 The United States and our allies stand with the people of Georgia and their democratically elected government. Georgia's sovereignty and territorial integrity must be respected. Moscow must honor its commitment to withdraw its invading forces from all Georgian territory.

Some Americans listening today may wonder why events taking place in a small country halfway around the world matter to the United States. In the years since it's gained independence after the Soviet Union's collapse, Georgia has become a courageous democracy. Its people are making the tough choices that are required of free societies. Since the Rose Revolution in 2003, the Georgian people have held free elections, opened up their economy, and built the foundations of a successful democracy.

Georgia has sent troops to Afghanistan and Iraq to help others achieve the liberty that they struggled so hard to attain. To further strengthen their democracy, Georgia has sought to join the free institutions of the West. The people of Georgia have cast their lot with the free world, and we will not cast them aside.

Georgia's emergence as a young democracy has been part of an inspiring and hopeful new chapter in Europe's history. Europe has moved beyond the world wars that killed millions of people, and the Cold War that divided its citizens between two superpowers. Every administration since the end of the Cold War has worked with European partners to extend the reach of liberty and prosperity. And now, for the first time in memory, Europe is becoming a continent that is whole, free, and at peace.

Unfortunately, Russia has tended to view the expansion of freedom and democracy as a threat to its interests. The opposite is true: Free and prosperous societies on Russia's borders will advance Russia's interests by serving as sources of stability and economic opportunity.

With its actions in recent days Russia has damaged its credibility and its relations with the nations of the free world. Bullying and intimidation are not acceptable ways to conduct foreign policy in the 21st century. Only Russia can decide whether it will now put itself back on the path of responsible nations, or continue to pursue a policy that promises only confrontation and isolation. To begin to repair its relations with the United States and Europe and other nations, and to begin restoring its place in the world, Russia must respect the freedom of its neighbors.