For Immediate Release
Office of the First Lady
August 14, 2008

Thank you all for letting me visit your school today. I've traveled to many cities, in fact to every single state in the United States except one, South Dakota -- North Dakota, rather, which I am going to this September. But New Orleans is one of my favorite destinations. In fact, this is my second visit to New Orleans just in the last three months. This city's world-renowned cultural attractions make it the perfect place to talk about the National Endowment for the Humanities' Picturing America initiative. 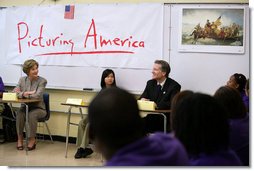 Louisiana has a long history with a very diverse population. When the East Coast was still populated mainly by British colonists, New Orleans boasted citizens of English, French, Spanish, African and German origin. This diversity, in fact, caused a stir when the Territory of Orleans petitioned for statehood. Congressman Josiah Quincy objected most passionately, and he said, "It was not for these men that our fathers fought."

This understanding of what it means to be American has helped our nation accommodate rapid change. After all, 32 more states joined the Union after Louisiana, and America did not suffer the "dissolution" that Quincy predicted. But basing national identity on a set of ideals makes our unity fragile across generations. America has a proud past and a bright future. But we must safeguard it by educating young people about the values that make us who we are. 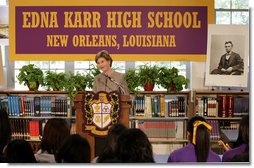 Picturing America is achieving this goal by making 40 iconic American images available to schools and libraries across the United States. From Native American decorative arts to Frank Lloyd Wright's modern architecture, each reproduction captures the culture and the attitudes of turning points in American history.

President Bush and I announced Picturing America at the White House in February. Since then, more than 26,000 schools and libraries have been selected to receive this collection, including Edna Karr High School. This means that 20 percent of America's schools and libraries are receiving these grant awards -- more than the number of awards the National Endowment for the Humanities has made in all of its grant programs in the past 20 years combined.

The National Endowment for the Humanities wants even more schools and libraries to be part of this program. They have opened the application period for a second round of awards to be distributed in 2009. And the deadline for these applications is October 31st. More than 300 Louisiana schools and libraries have been selected to receive the Picturing America collection this year. We hope others join them to apply to receive this group of our nation's iconic art.

Picturing America will also encourage students to explore our artistic heritage outside the classroom. The collection's masterpieces are accessible at museums including the National Gallery of Art in Washington, the Metropolitan Museum in New York. Or in New Orleans, you have local options for exploring how art shapes identity. The Ogden Museum houses the largest and most comprehensive collection of Southern art in the world, and it's only a 15-minute drive from your school.

Just a few minutes ago, students joined me for a preview of Picturing -- of how Picturing America will enhance instruction at Edna Karr. We discussed four images, including Emanuel Leutze's Washington Crossing the Delaware. A reproduction of this famous painting hangs in the West Wing lobby at the White House. It's the first thing visitors see on their way to the Oval Office -- and appropriately so. The image shows the determination of General Washington and his men as they fought for freedom against all odds. Washington won his battle that day, putting America on the path to victory in the Revolutionary War.

America is defined by its trials as much as by its triumphs. Dorothea Lange's Migrant Mother captures a woman struggling to feed her family during the Great Depression. The outcry this photograph sparked on publication is a testament to the power of art, and an example of Americans' compassion for their neighbors in need.

Picturing America takes on a special significance here in your home of New Orleans, where you're writing a new chapter in the story of the American spirit. Hurricane Katrina forced more than 1,100 schools closed across the Gulf Coast. Buildings were destroyed; libraries ruined; and students and teachers were displaced. Many of you lost everything familiar, and you were forced to start over in new homes and new schools.

For each of you, Picturing America is not just a reminder of how previous generations overcame obstacles. It's a reminder of how through your perseverance you continue that legacy today. This is the core of Picturing America. The program sustains the link between past, present and future. And it reinforces this truth: that as long as we understand our common heritage, no disaster can destroy the values that make us American.

Thank you all very much, and God bless you. (Applause.)